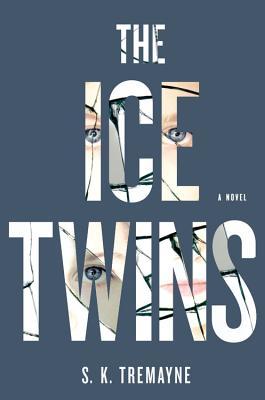 One of Sarah’s daughters died. But can she be sure which one?

A year after one of their identical twin daughters, Lydia, dies in an accident, Angus and Sarah Moorcroft move to the tiny Scottish island Angus inherited from his grandmother, hoping to put together the pieces of their shattered lives.

But when their surviving daughter, Kirstie, claims they have mistaken her identity–that she, in fact, is Lydia–their world comes crashing down once again.

As winter encroaches, Angus is forced to travel away from the island for work, Sarah is feeling isolated, and Kirstie (or is it Lydia?) is growing more disturbed. When a violent storm leaves Sarah and her daughter stranded, they are forced to confront what really happened on that fateful day.

I read lots of reviews that talked about how this book is supposed to be super creepy and I was looking forward to it, but it didn’t quite live up to the hype of it for me. There were a couple of chapters towards the end that were suitably creepy and I just wish more of the book would have been more like that.

Sarah and Angus are the bereaved parents of twins, one of which died about a year before in an accident. To try and get away from their money woes and their London home with too many memories, they decide to move to a Scottish island which Angus has recently inherited. Before they move, however, Sarah begins to have doubts about which twin is still alive when Kirstie starts insisting that she’s really Lydia.

After moving to the island Kirstie continues to insist she’s Lydia and after conducting her own investigation and tests, Sarah believes that her surviving child is in fact Lydia. This discovery doesn’t help the family tension, though, as Lydia repeatedly claims that Kirstie is still there and she often tries to communicate with Lydia. Sarah begins to wonder, yet again, if they have mixed up the twins.

One thing that I thought of right away when Sarah was trying to figure out the identity of her surviving daughter was the episode of Full House where Uncle Jesse mixes up his twins and they figure out which one is which by their footprints. Easy, right? The idea of finger prints is later brought up in the novel, but it’s ruled out because the girls were never finger printed. Does London not fingerprint/footprint babies when they’re born? I thought that happened to all babies? Is it just an American thing?

The story is told mainly through Sarah’s 1st person POV, with several chapters coming from Angus’ 3rd person POV. Where I don’t usually like the switch from 1st person to 3rd person, it fits well with the narrative style here. It also helped move the story along by getting Angus’ POV as we get more clues to the truth from him than we do from Sarah.

Both Sarah and Angus were pretty unlikable. They are both halfway committed to make their failing marriage work, but there is really no love between them anymore. While they still care for each other, they definitely don’t love each other and their apathy towards each other was disheartening to read. There are lies and secrets between them and it’s not until the final chapters that we can really understand the extent of Angus’ anger.

While they are staying together for Kirstie/Lydia, they are really not very good parents. They both add to the deterioration of her mental state/self identity and Sarah largely ignores much of what her daughter says instead of trying to deal with any of it head on. Kirstie/Lydia does really get crazier and creepier as the story goes on and I wish there was more time spent interacting with her.

Overall, I enjoyed The Ice Twins. It wasn’t as creepy as I was hoping for, but it was a good character-driven novel, which I like. While the desolate island helped set the tone for the story, the descriptions often got a little too cumbersome for me and I found myself skimming. I would recommend this book to fans of character-driven and psychological suspense novels.

There are a couple things that I want to mention, but they are spoilers and if you haven’t read the book DO NOT READ ANY FURTHER!

While a lot of this book was pretty unique, Angus was sometimes a clichéd character. I guessed in the very first chapter that he was having/have had an affair with Imogen, Sarah’s best friend. Also, as I mentioned above, the use of Sarah’s 1st person POV and Angus’ 3rd person POV is important. The final chapter is told in 1st person POV and it isn’t until halfway through that it’s revealed to be Angus and not Sarah. While I thought this was a fun twist of narrative style, I suspected the shift right away.

4 thoughts on “Review: The Ice Twins by S.K. Tremayne”