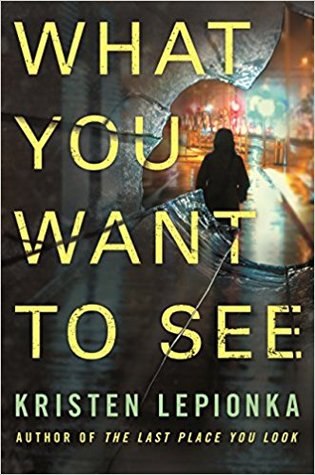 Read the synopsis on Good Reads:

I really enjoyed Kristen Lepionka’s debut book of the Roxane Weary series, The Last Place You Look, and I think I liked this one even better.

I’m not going to share the synopsis here because I think it gives way too much of the plot away. While I think it would be best to start with the first book in the series to have a better handle on Roxane’s relationships, romantic and otherwise, the mystery is self-contained to this book and could be read as a standalone. Roxane is a private investigator who recently closed a very high profile case. She’s taken a much more low-key job – trailing a possible cheating fiancé. The case spirals into something much more dangerous and Roxane finds herself caught up in the middle of it.

I really enjoyed the twisty mystery in this. There were just so many layers that kept being revealed. It had the potential to get really out of hand, but Lepionka juggled it all really well. In a lot of mysteries I read these days I have everything all figured out pretty early on, but this one kept me guessing. While there were a few things I might have predicted, there were lots of other things I didn’t. I kind of liked just reading it and being surprised, instead of trying to figure out every little thing. I thought the pacing was well done and there was never a time I felt like something drug on too long. I did think the ending was jut a tiny bit rushed, though, and thought there were a couple of loose ends that weren’t tied up quite as neatly as I would’ve liked them to have been.

I thought Roxane was a little more likable in this book, as well. She seems to be working on her alcohol issues (most of the time, anyways) and she appears a little more self-aware. She had some good character growth, which I appreciated. I’m still not thrilled with her romantic interests, though (yes, there’s two). I really, really disliked Catherine in the previous book. She just seemed like an awful person who was no good at all for Roxane. She was a little better and a little more self-aware, too, this time around, but I think she’s still technically married and I’m just not on that ship. I do like Tom, as a character, but he also is in a relationship with someone else. To be fair, there were not any real romantic moments between he and Roxane in this book, but there’s still obvious chemistry that seems a little inappropriate given his relationship status. If he breaks up with his girlfriend, though, I think I could really root for him to be with Roxane.

Overall, I really enjoyed What You Want to See. It was well-paced and well-written, with a really interesting mystery. I also love that this book is set in Columbus, OH and I recognized a lot of the areas mentioned. I definitely recommend this series to Mystery fans and am looking forward to reading more from Lepionka in the future.

12 thoughts on “Review: What You Want to See (Roxane Weary #2) by Kristen Lepionka”