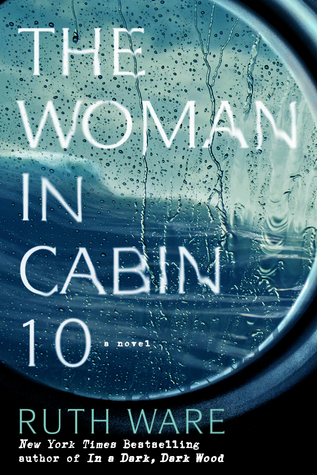 From New York Times bestselling author of the “twisty-mystery” (Vulture) novel In a Dark, Dark Wood, comes The Woman in Cabin 10, an equally suspenseful novel from Ruth Ware—this time, set at sea.

In this tightly wound story, Lo Blacklock, a journalist who writes for a travel magazine, has just been given the assignment of a lifetime: a week on a luxury cruise with only a handful of cabins. At first, Lo’s stay is nothing but pleasant: the cabins are plush, the dinner parties are sparkling, and the guests are elegant. But as the week wears on, frigid winds whip the deck, gray skies fall, and Lo witnesses what she can only describe as a nightmare: a woman being thrown overboard. The problem? All passengers remain accounted for—and so, the ship sails on as if nothing has happened, despite Lo’s desperate attempts to convey that something (or someone) has gone terribly, terribly wrong…

With surprising twists and a setting that proves as uncomfortably claustrophobic as it is eerily beautiful, Ruth Ware offers up another intense read.

I won a copy of this title from the publisher via a giveaway on Good Reads. This does not impact my review.

This is a book I have been looking forward to reading for awhile and I was very excited to win a copy. It seemed to take forever to finally receive it, but once it did I read it in a weekend.

The Woman in Cabin 10 started out a little slow. The main character, Lo, was pretty unlikable. She seems to be kind of an alcoholic and mixes alcohol with anxiety medication and isn’t really the most reliable witness. She’s kind of belligerent with people, as well. Throw in some PTSD from a recent break-in at her apartment and very few people believe her when she insists the woman in the cabin next to hers on a cruise ship has been thrown overboard. Of course, there’s also no record of a woman staying in that cabin to begin with.

Once we reach the part in the book where Lo tries to investigate what really happens is where the story really picks up and I had a hard time putting it down. The setting was kind of creepy and Lo’s paranoia was really well written. I suspected many different people, including Lo and her questionable mental state. While this part of the book seemed to fly by for me, we reach a part where it’s basically just a lot of Lo conjecturing with very little plot advancement and the book slowed way down again. The final chapters leading up to the end picks up a little again, but overall the pacing of the novel was just a little too uneven.

Overall, I did enjoy The Woman in Cabin 10. Though the pacing was a little off for me, there were definitely big parts of the story where I couldn’t put it down. Though Lo was a pretty unlikable character for the most part, I did feel a connection to her by the end. I felt the conclusion was a little bit rushed and I think maybe an epilogue from a different POV could have really added something to the story. Overall, though, I think this is a book that I will read again and recommend to mystery/thriller fans who don’t mind unlikable MCs.

9 thoughts on “Review: The Woman in Cabin 10 by Ruth Ware”