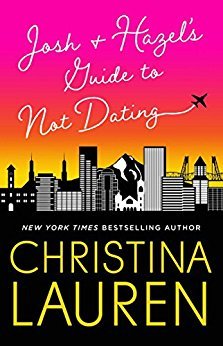 Most men can’t handle Hazel. With the energy of a toddler and the mouth of a sailor, they’re often too timid to recognize her heart of gold. New York Times and #1 international bestselling author Christina Lauren (Roomies, Beautiful Bastard) tells the story of two people who are definitely not dating, no matter how often they end up in bed together.

Hazel Camille Bradford knows she’s a lot to take—and frankly, most men aren’t up to the challenge. If her army of pets and thrill for the absurd don’t send them running, her lack of filter means she’ll say exactly the wrong thing in a delicate moment. Their loss. She’s a good soul in search of honest fun.

Josh Im has known Hazel since college, where her zany playfulness proved completely incompatible with his mellow restraint. From the first night they met—when she gracelessly threw up on his shoes—to when she sent him an unintelligible email while in a post-surgical haze, Josh has always thought of Hazel more as a spectacle than a peer. But now, ten years later, after a cheating girlfriend has turned his life upside down, going out with Hazel is a breath of fresh air.

Not that Josh and Hazel date. At least, not each other. Because setting each other up on progressively terrible double blind dates means there’s nothing between them…right?

Josh and Hazel’s Guide to Not Dating will be available September 4, 2018.

I’ve had some mixed reviews with the Christina Lauren books I’ve read so I’m never really sure what to expect when I pick one up. However, I do know that there will be some addicting writing that will make the book hard to put down and Josh and Hazel’s Guide to Not Dating was exactly that.

Hazel. I’m having a hard time deciding on my feelings towards her. Since I have recently been binging old New Girl episodes on Netflix, I’m going to compare her to Season 1 Jess. They really leaned into the whole “adorkable” angle and sometimes she was a little unbearable. In later seasons she was still quirky, but in a more endearing way. In some parts of this book Hazel was kind of aggressively quirky in a Season 1 Jess kind of way. But in others, she was just a little odd and cute. I didn’t find her character all that consistent throughout the story. Even though she often stated that she knew she was a lot to handle and she wasn’t going to change for anybody, I also got the feeling that she felt kind of sorry for herself about it and wished she could? There were times I felt like she was trying to be different for the sake of being different. Then there were other times where she seemed pretty normal. As you can see, I still feel a little conflicted about it. Overall, I think she could be a little unbearable at times, but I mostly enjoyed her.

I was a much bigger fan of Josh. He was so funny and sweet and I just adored him. I liked how protective he was of Hazel. Even though he could come off uptight about a lot of things, he seemed to be the perfect amount of laid back to be able to go with the flow with Hazel. I liked his relationship with his sister and his parents, as well. We get a little bit of information on Korean culture from him, but I would’ve liked a little more.

I’m a fan of the Friends-to-More trope so I shipped Josh and Hazel. However, I wish it would’ve taken a little longer for them to really fall for each other. We get both their POVs which means we find out basically right away that Hazel has always had a thing for Josh and then Josh pretty quickly starts to like her, too. However, they both think they’re wrong for each other and they’re both unsure how the other feels and by getting both POVs it kind of takes away all the tension. It just kind of made me annoyed with both of them. There were still some really cute and romantic scenes, though (and several graphic scenes I could’ve done without, but I’m sure other readers will appreciate).

Overall, I enjoyed Josh and Hazel’s Guide to Not Dating. It was cute, funny, and I shipped the romance. However, Hazel was kind of hard to take at times and there wasn’t a moment where I didn’t know exactly what was going to happen next. While the story utilized one of my favorite romantic tropes, Friends-to-More, it also employs one of my least favorites (I’m not going to say which since it’s too spoiler-y) and I have to say that dampened my overall enjoyment a bit. I do definitely recommend this one to Romance fans, though, especially Christina Lauren fans.

16 thoughts on “Review: Josh and Hazel’s Guide to Not Dating by Christina Lauren”