Bridgerton on Netflix. There is one season of 8 episodes currently available. It’s based on the book The Duke and I by Julia Quinn.

Wealth, lust, and betrayal set in the backdrop of Regency era England, seen through the eyes of the powerful Bridgerton family.

It seemed like everywhere I looked, I was seeing an advertisement for Bridgerton. I’ve liked a few Shondaland shows, so I thought I’d give it a try, even though I really didn’t have any high expectations for it. I’ve never read the book, nor am I super interested in regency romance stories these days. However, I really ended up loving it! It’s such a fun show with some absolutely stunning settings and costumes. It does get a little (or a lot) risque at times, so make sure your kids aren’t watching it with you if you give it a go.

There’s romance, humor, mystery and a large and lovable cast of characters. The chemistry between the two leads really makes the show. 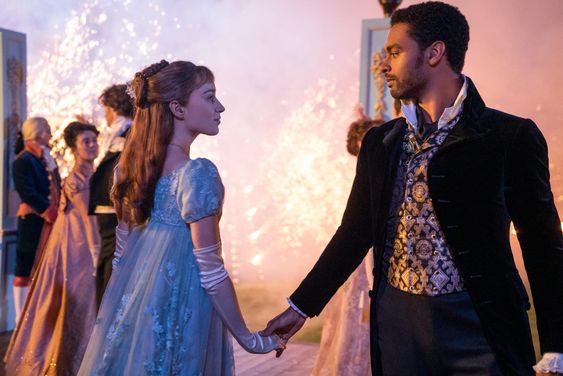 The Duke and I

Today I’m going to branch out from books and talk about one of my other loves – tv! This will be a disorganized mess of thoughts, so don’t expect too much, other than some ranting. Scandal, starring the amazing Kerry Washington, is a guilty pleasure show of mine. It’s often ridiculous, but also addictive and entertaining. As time has gone on it’s become increasingly ridiculous and a little less entertaining, but I still watch it every week.

This season’s finale really bugged me, though. SPOILERS AHEAD. First of all, the wrap-up (for now at least) of the B613 storyline was pretty lame. Huck working for “command” kind of came out of nowhere and we all know Quinn isn’t going to kill him. They are the only two gladiators left, can Olivia Pope & Associates really lose any more employees? Secondly, I am soooooo Team Jake. He’s definitely had his shady moments, but at the end of the day he’s been there for Olivia and is her equal. They complement each other well and could do great things. And, hey, he isn’t married. Him leaving at the end of the episode really disappointed me.

My biggest problem, though, is with Fitz – like always. I really hate this character. I have never, ever shipped the Fitz and Olivia relationship, despite the fact it’s supposed to be the core of the show. But let’s set that aside for a moment. What really annoyed me was Fitz’s response to finding out Mellie had an unwitting hand in the murder of a busload of people and then didn’t tell him about it. He very holier-than-thou told her to get out of “his house”.

Can we please take a moment to reflect on all the reasons why Fitz has no right to be so judgey?

-He shot down a commercial plane full of innocent people (under the orders of the same person Mellie gave the list of names to for the bus).

-He, as President, ALMOST STARTED A WAR just to save one person.

-He KILLED A SUPREME COURT JUDGE to hide his own secret of the FIXED ELECTION that got him his presidency.

So, really Fitz? He can act like a huge douche and then the show ends with he and Olivia being all lovey-dovey? LAME.

Do you watch Scandal? What did you think of the finale? Do you ship Fitz and Olivia – if so WHY?

For this week’s Top Ten Tuesday, hosted by The Broke and the Bookish, we’re talking about my other favorite love – tv! As you might imagine, my social life is pretty rocking. 🙂

Six Seasons and a Movie! Take that NBC! Community will be back for it’s sixth season on Yahoo.

I just discovered this show right before the second season started and binge watched the whole first season in a weekend. Tatiana Maslany is EVERYTHING!

This is a show that just got consistently better with each episode. The cast of characters are amazing!

Gilmore Girls will always be one of my favorite shows. I have the complete series and have watched it a gazillion times.

Though it waned a little in it’s later years, this is still one of my all time favorites. This show coming back was amazing! I can’t wait for more!

This show really just gets more ludicrous as it goes on, but I’ve watched it from the beginning and I love it. Kerry Washington is amazing!

I can’t help it. I love it. My favorite reality show.

This cast is hilarious.