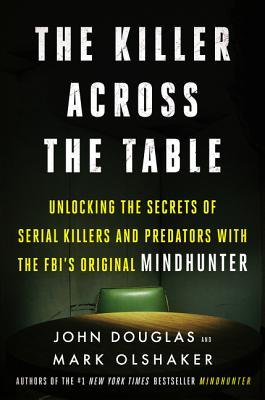 The legendary FBI criminal profiler, number-one New York Times bestselling author, and inspiration for the hit Netflix show Mindhunter delves deep into the lives and crimes of four of the most disturbing and complex predatory killers, offering never-before-revealed details about his profiling process, and divulging the strategies used to crack some of America’s most challenging cases.

The FBI’s pioneer of criminal profiling, former special agent John Douglas, has studied and interviewed many of America’s most notorious killers—including  Charles Manson, ”Son of Sam Killer” David Berkowitz and ”BTK Strangler” Dennis Rader—trained FBI agents and investigators around and the world, and helped educate the country about these deadly predators and how they operate, and has become a legend in popular culture, fictionalized in The Silence of the Lambs and the hit television shows Criminal Minds and Mindhunter.

Twenty years after his famous memoir, the man who literally wrote the book on FBI criminal profiling opens his case files once again. In this riveting work of true crime, he spotlights four of the most diabolical criminals he’s confronted, interviewed and learned from. Going deep into each man’s life and crimes, he outlines the factors that led them to murder and how he used his interrogation skills to expose their means, motives, and true evil. Like the hit Netflix show, The Killer Across the Table is centered around Douglas’ unique interrogation and profiling process. With his longtime collaborator Mark Olshaker, Douglas recounts the chilling encounters with these four killers as he experienced them—revealing for the first time his profile methods in detail.

Going step by step through his interviews, Douglas explains how he connects each killer’s crimes to the specific conversation, and contrasts these encounters with those of other deadly criminals to show what he learns from each one. In the process, he returns to other famous cases, killers and interviews that have shaped his career, describing how the knowledge he gained from those exchanges helped prepare him for these.

A glimpse into the mind of a man who has pierced the heart of human darkness, The Killer Across the Table unlocks the ultimate mystery of depravity and the techniques and approaches that have countered evil in the name of justice.

I received a copy of this title from the Publisher. It does not impact my review.

The Killer Across the Table will be available May 7, 2019.

I don’t often read Non-Fiction, but profiling has always fascinated me. Mindhunters has also been on my Watch List, so when I realized John Douglas is the inspiration for that show, I knew I had to read The Killer Across the Table.

John Douglas is a pioneer in profiling for the FBI. He and his colleague, Bob Ressler, started interviewing violent criminals to learn more about their motivations, which can ultimately help law enforcement in identifying, catching, and prosecuting the guilty. The book focuses on four different killers, ranging from a one-time (though horrific) offender to a serial killer. Included in each chapter is detailed background information about the subject, anecdotes of his interviews with other criminals that relate in some way to the current subject, details of the interview, and analysis of what it all means.

I found the book really interesting. It does not shy away from any of the gruesome facts, so it may not be for all readers. The four main subjects were Joe McGowan, Joseph Kondro, Donald Harvey, and Todd Kohlhepp. I had never heard of any of these men before picking up this book, but I will not soon forget the atrocities they committed. While the many anecdotes on previous cases were very interesting and added to the main case being discussed, it did get a little confusing at times with all the names and details being thrown around. There were also a few times where Douglas comes across pretty arrogant, mockingly dismissing the opinions of other professionals that he disagreed with. However, he is obviously very knowledgeable and dedicated to what he does, so I could look past the more arrogant moments.

Overall, I enjoyed The Killer Across the Table. I think profiling work is so interesting and I liked learning a little more about the process. I definitely recommend this one to true crime fans.