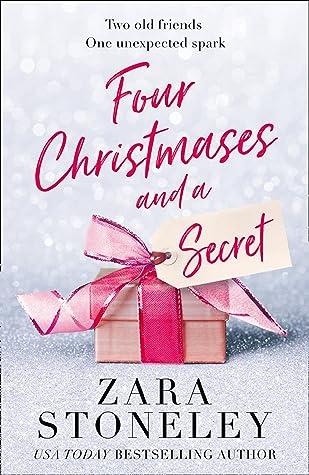 It’s the most wonderful time of the year…

Every year Daisy has to face insufferable Ollie and hear all about how BRILLIANT he is.  Whereas Daisy has no job, no man and no idea how to fix things.

This Christmas however Daisy is determined things will be different.  There will be no snogging Ollie under the mistletoe like when they were teenagers.  No, this year she’ll show Ollie that she’s a Responsible Adult too.

But as the champagne corks pop, and the tinsel sparkles, Uncle T has news of his own to share…and it could change Daisy’s life forever…

Four Christmases and a Secret will be available September 27, 2019.

When it comes to gearing up for the holidays, I don’t typically want to see anything Christmas-related until after Thanksgiving. However, I will always make an exception for two things: Hallmark Christmas movies and Christmas-themed books. Throw in that beautiful cover and I was all in for Four Christmases and a Secret.

This is one of those books where I don’t feel the synopsis does the story justice. It’s slightly misleading and doesn’t really explain about what the book really is. While there are definite Christmas and Romance themes, I really felt like this one fell more into the Women’s Fiction category. Daisy is quite a mess when we first meet her and a big part of the book is made up of her getting her act together. With a lot of encouragement and support from Uncle Terrence and Ollie, she gets her confidence back and figures out what she actually wants out of life. I did like her journey and found her a likable character. I also loved Ollie, Uncle Terrence, and Daisy’s mother. It seems to be a bit of a Stoneley signature for the main character to have a very loud, outspoken, quirky mother and she was on full display here. The only character I didn’t really like was Daisy’s best friend, Frankie, who I thought was awful right from the beginning.

I enjoyed the friendship and romance between Daisy and Ollie. I thought they fit really well together. I felt like a lot of their relationship was kind of glossed over, though. In one scene they’re having their first real kiss and then in the next they’ve been ‘together’ for awhile and we didn’t get to see any of that discussion or proper dates or anything like that. The first time they say they love each other is off page, as well. I didn’t really know how serious they were or where they were at in the relationship because there were jumps in time and a lot of the development happened between scenes. I thought this could have been handled a little better, but I still shipped them and was happy where they ended up.

Overall, I enjoyed Four Christmases and a Secret. I liked the characters and the romance and the journey of self-discovery Daisy went on. It ended up being a lot more serious than I thought it would be – more Women’s Fiction than Romance – but it still worked for me. It definitely put me in the mood for some good holiday themed movies and books. I look forward to checking out more from Stoneley in the future.