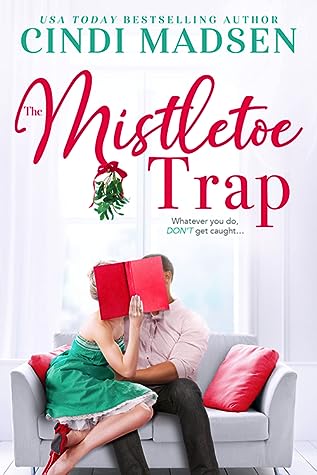 From the moment Julie sees her best friend, Gavin, in the airport, it’s like no time at all has gone by instead of months and months. No matter how long they’ve been apart, their relationship has always been steady, comfortable, and decidedly just friends. Even though their meddling parents have hung what seems like unlimited amounts of mistletoe everywhere she goes this holiday season, Julie knows some things will never change.

Gavin is well-aware his family’s wanted him and Julie to get together since forever, even though he’s been friend-zoned since they could talk—and he’s been happy to play that role. After all, as the new starting quarterback for the San Antonio Mustangs, he’s got enough on his plate without adding romance to the mix.

But between playing elves in the holiday bazaar to nights spent one-on-one watching rom-coms or soaking in their town’s hot springs, suddenly the “reverse parent trap” they’ve fallen into is actually starting to work. But this could be one scheme where letting themselves get trapped might be way too dangerous.

Each book in the Heart in the Game series is STANDALONE:
* The Wedding Deal
* The Mistletoe Trap

I received a copy of this title from the publisher via NetGalley. It does not impact my review.

*I love a good Friends to More Romance and Madsen does them well. I really enjoyed Julie and Gavin’s friendship and shipped them to get together.

*Though I thought their parents bordered on rude and over the top sometimes when it came to wanting Julie and Gavin to be together, I did really like how close their families were. It’s nice to see happy marriages and even nicer to see big, happy families. It made me wish my family was as close to another as Julie and Gavin’s are.

*I liked the small town and all the cute holiday traditions.

*While I had some problems with the evolution of their relationship (I’ll get to that), I liked the big, cheesy, romantic gesture at the end. It was cute and made me smile.

*I’m not a fan of the whole “looking for a casual fling” thing. After Julie breaks up with her boyfriend and he calls her boring, she decides she needs a fling to prove she’s not boring and also improve her bedroom skills. This is kind of a common Romance plotline and I never appreciate it. It made me like Julie a little less.

*I also am not a fan of the Friends-with-Benefits plotline. Though we know that the couple are obviously in love with each other, I didn’t like that they – especially Gavin – chalked it up to just being a new physical attraction and wanted to work it out of their systems and then move on with their friendship. I also didn’t like how either one of them handled the fall out when they realized it wasn’t that simple.

*I thought the book was a little longer than it needed to be. For how little actually happens in the book, it could have been about half the length.

Overall, I did enjoy The Mistletoe Trap. Though it’s definitely not my favorite Madsen book, it had it’s cute moments and helped put me in the holiday mood. If you’re looking for a Christmas Romance, you should give this one a try. 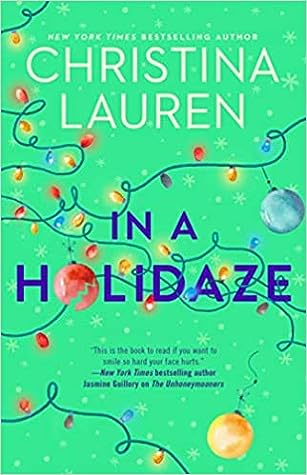 In a Holidaze, the quintessential holiday romantic novel by the New York Times bestselling author of The Unhoneymooners, asks what happens when wishes come true…

It’s the most wonderful time of the year…but not for Maelyn Jones. She’s living with her parents, hates her going-nowhere job, and has just made a romantic error of epic proportions.

But perhaps worst of all, this is the last Christmas Mae will be at her favorite place in the world—the snowy Utah cabin where she and her family have spent every holiday since she was born, along with two other beloved families. Mentally melting down as she drives away from the cabin for the final time, Mae throws out what she thinks is a simple plea to the universe: Please. Show me what will make me happy.

The next thing she knows, tires screech and metal collides, everything goes black. But when Mae gasps awake…she’s on an airplane bound for Utah, where she begins the same holiday all over again. With one hilarious disaster after another sending her back to the plane, Mae must figure out how to break free of the strange time loop—and finally get her true love under the mistletoe.

Jam-packed with yuletide cheer, an unforgettable cast of characters, and Christina Lauren’s trademark “downright hilarious” (Helen Hoang, author of The Bride Test) hijinks, this swoon-worthy romantic read will make you believe in the power of wishes and the magic of the holidays.

Whenever I am in a book slump, I can always count on Christina Lauren to pull me out. Before I picked this up, I hadn’t been having great luck with the books I was reading, but In a Holidaze definitely broke me out of my rut.

The story ended up being a little different than I thought it would be, though. The synopsis mentions “hilarious disasters” send Mae back to start the day over and over again and I guess I expected a little more hijinks. What sends her back are life-threatening accidents – and not funny ones. And she didn’t “reboot” as often as I expected, either. I thought there would be several reimaginings of the same scene, but this was limited to only one or two specific scenes before that part of the plot was basically left behind and Mae goes on to live several days in a row that we hadn’t seen before. This isn’t really a bad thing as I like how the story unfolded, I just wish the authors would have committed a little more to the hook of the plot.

That said, I enjoyed watching Mae’s week of Christmas vacation unfold. Every year, her family joins a few other families at a cabin to spend the holiday together. They’ve been doing it since before Mae was even born and the week is steeped in tradition. I loved the cast of characters. They were such a fun, close group of people and I would love to have a group like them in my life. Included in that group is Andrew, who Mae has had a crush on for half her life. He’s always thought she had a thing for his younger brother, so he’s always treated her like more of a little sister than potential love interest. When Mae decides the universe is telling her to go for it with Andrew, she lets him know how she feels and a bit of a slow burn romance begins.

I really enjoyed the romantic development between Mae and Andrew. He was just so sweet. It seemed almost impossible that he could be so perfect and I kept waiting for him to do something awful. Thankfully, he is just a really great guy. There was a bit of time where I got annoyed with him for how he reacted to something, but overall I thought he was a great romantic lead and I definitely shipped him with Mae.

Overall, I really enjoyed In a Holidaze. While I wish it had committed to the whole “groundhog day” gimmick a little more, I liked the romance and the family atmosphere of the cabin. While I did like Mae’s journey to becoming a more confident person, I thought the “big lesson” was a little underwhelming and could have done without a passage regarding religion that I found a little offensive. However, Christina Lauren’s addictive writing and the cute romance definitely broke me out of the reading slump I was in and this book is one I would recommend to Romance fans.