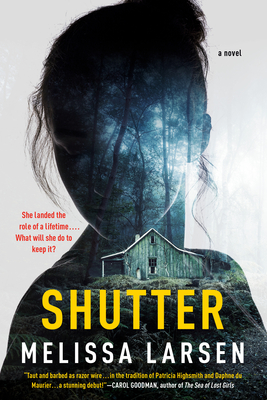 A young woman agrees to star in a filmmaker’s latest project, but soon realizes the movie is not what she expected in this chilling debut novel.

In the wake of her father’s death, Betty Roux doesn’t allow herself to mourn. Instead, she pushes away her mother, breaks up with her boyfriend, and leaves everything behind to move to New York City. She doesn’t know what she wants, except to run.

When she’s offered the chance to play the leading role in mysterious indie filmmaker Anthony Marino’s new project, she jumps at the opportunity. For a month Betty will live in a cabin on a private island off the coast of Maine, with a five-person cast and crew. Her mother warns against it, but Betty is too drawn to the charismatic Anthony to say no.

Anthony gives her a new identity–Lola–and Betty tells herself that this is exactly what she’s been looking for. The chance to reinvent herself. That is, until they begin filming and she meets Sammy, the island’s caretaker, and Betty realizes just how little she knows about the movie and its director.

Oh boy, this books was absolutely not for me. I’ve tried really hard to think of positive things to say about it and the only thing I can think of is that I actually felt the need to finish it, instead of DNF-ing it. I wish I would have DNF-ed it, though.

The characters were all awful. Every last one of them. There was no one to root for. No one to connect with. I could not for the life of me understand why everyone was so drawn to narcissistic Anthony. Or why Betty just rolled over every time he said “trust me,” even though he had done absolutely nothing to prove himself worthy of trust. And Betty. The story is told through her first person POV and it was a trial to be stuck in her head. I think we’re supposed to give her a pass because she’s still grieving over the loss of a parent, but that does not make up for the never ending parade of stupid decisions she made.

While the plot of making a mysterious movie on a secluded island sounded like it would be creepy and entertaining, I ended up just rolling my eyes at the whole thing. Anthony’s motivation was childish and psychopathic, as was Sammy’s character. The whole thing was just ridiculous and then the ending was super anti-climactic.

Overall, I did not enjoy Shutter at all. I kept waiting for some great twist to be revealed that would make everything worth it, but it never came. The awful characters and ridiculous plot made this a chore to get through. While this book is obviously not for me, I have seen some much better reviews on it, so it might be worth the read for others.