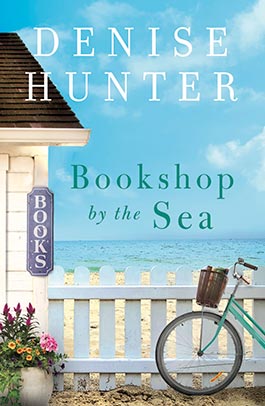 Sophie Lawson should be enjoying her sister’s wedding day. But nothing could have prepared her to see the best man again.

After her mother became bedridden and her father bailed on the family, Sophie found herself serving as a second mother to her twin brother, Seth, and younger sister, Jenna. Sophie supported her siblings through their college years, putting aside her own dream of opening a bookshop in Piper’s Cove—the quaint North Carolina beach town they frequented as children.

Now it’s finally time for Sophie to follow her own pursuits. Seth has a new job, and Jenna is set to marry her college beau in Piper’s Cove. But the destination wedding reunites Sophie with best man Aiden Maddox, her high school sweetheart who left her without a backward glance.

When an advancing hurricane strands Aiden in Piper’s Cove after the wedding, he finds the hotels booked to capacity and has to ask Sophie to put him up until the storm passes. As the two ride out the weather, old feelings rise to the surface. The delay also leaves Sophie with mere days to get her bookshop up and running. Can she trust Aiden to stick around? And will he find the courage to risk his heart?

It’s been awhile since I’ve read a Denise Hunter book, but I thought Bookshop by the Sea looked pretty cute. Her books are often hit or miss for me, but this one ended up somewhere in the middle.

I really enjoyed the beginning as Sophie and Aiden found themselves stuck together after seven years apart. I liked seeing them start to communicate and forgive each other. Once they hit that point, though, I kind of started to lose interest. I felt like the pace dragged and there wasn’t really much plot. I also wasn’t completely sold on them rekindling their romance. For one thing, Aiden is dating someone else for the first half of the book. He goes to great pains to say they’re not exclusive, but it still made him come across a little skeevy.

There was some added drama with Sophie’s family being basically awful and selfish people and Aiden dealing with abandonment issues. While I think there were some good lessons learned, it was all crammed into the ending, where everything was resolved surprisingly easily.

Overall, Bookshop by the Sea was just ok for me. It had a promising start and while Hunter seemed to know where she wanted all the characters to end up, it felt like the middle was kind of phoned in. While this one wasn’t really for me, I’ll still be checking out more from this author in the future.

8 thoughts on “Review: Bookshop by the Sea by Denise Hunter”