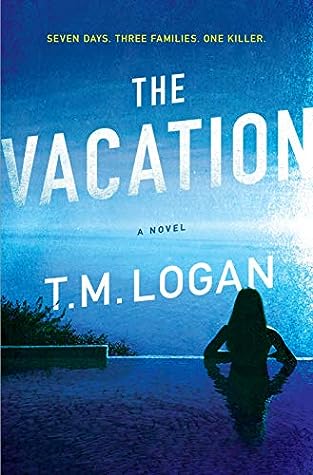 In The Vacation, a captivating thriller from T. M. Logan, the bestselling author of Lies and 29 Seconds, four lifelong friends on a luxurious vacation come face-to-face with an explosive secret.

It was supposed to be the perfect vacation, dreamed up by Kate as the ideal way to turn 40: four best friends and their husbands and children, spending a week in a luxurious villa under the blazing sunshine of Provence.

But there is trouble in paradise.

Kate suspects that her husband is having an affair—and that the other woman is one of her best friends. One of these women is willing to sacrifice years of friendship and destroy her family. But which one?

As Kate closes in on the truth in the stifling Mediterranean heat, she realizes—too late—that the stakes are far higher than she ever imagined. And someone in the villa may be prepared to kill to keep their lies hidden.

Addictive writing, a steady pace, and a teasingly revealed mystery made The Vacation an unputdownable read for me.

The characters were all mostly awful people, but I felt invested in finding out what happened with them. Kate has been noticing that her husband has been acting off recently and when she stumbles upon messages on his phone, she suspects he’s having an affair with one of her three best friends, all of whom they are on vacation with. She spends a lot of time trying to figure out which of her friends is lying to her and there are suspicious things about each of them. It doesn’t help that her husband, Sean, remains cagey when she eventually tries to confront him. Thrown into the mix are the group’s children and a subplot you might be tempted not to pay too much attention to, but should. All of the children were even more awful than their parents, with the exception of sweet, innocent Daniel, Kate and Sean’s son.

The story is mostly told through Kate’s POV, but interspersed are chapters from other characters’ point of views and I thought it was done very well. It helped keep the pace steady and move the mystery along. I will say, though, that I thought things dragged on a little too long. While I didn’t guess everything that Kate eventually discovers, I was certain that things weren’t all they appeared to be. The clues that something more was going on felt pretty obvious, which made me a little frustrated with how long it took to get to a resolution. That said, I thought everything did come together nicely and I enjoyed it.

Overall, I enjoyed The Vacation. I thought the writing was addictive and I loved the use of multiple POVs. While I wish there was a little more of a twist, I was surprised by how things wrapped up and I liked that. I definitely recommend this one and look forward to Logan’s next book.

9 thoughts on “Review: The Vacation by T.M. Logan”