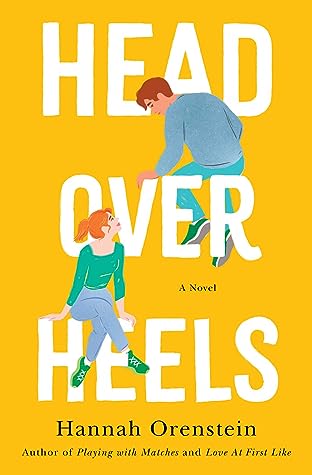 The past seven years have been hard on Avery Abrams: After training her entire life to make the Olympic gymnastics team, a disastrous performance ended her athletic career for good. Her best friend and teammate, Jasmine, went on to become an Olympic champion, then committed the ultimate betrayal by marrying their emotionally abusive coach, Dimitri.

Now, reeling from a breakup with her football star boyfriend, Avery returns to her Massachusetts hometown, where new coach Ryan asks her to help him train a promising young gymnast with Olympic aspirations. Despite her misgivings and worries about the memories it will evoke, Avery agrees. Back in the gym, she’s surprised to find sparks flying with Ryan. But when a shocking scandal in the gymnastics world breaks, it has shattering effects not only for the sport but also for Avery and her old friend Jasmine.

I always enjoy watching the Olympics and was pretty disappointed to hear that they are going to be postponed until next year. Head Over Heels looked like a good way to get a small Olympics fix in the mean time. However, it wasn’t really much more than that.

I was pretty bored throughout most of this book. I did enjoy the gymnastics included and reading about Hallie’s training routine as she prepared for the Olympic trials. I just wish there was a little more of an inside look. I feel like everything shared are things you can pick up by watching any of the countless features that play during the Olympics every year. There’s a lot more said about how hard gymnasts work than actually showing them working that hard.

I also never really cared about the romance. Avery and Ryan had crushes on each other as kids and their crushes have bled over into adulthood and they get together fairly quickly. I didn’t feel invested in their relationship at all, so when things went poorly and then got better, I just didn’t care. They could have ended the books as just friends and I wouldn’t have minded.

I expected a lot more to be said about the sexual abuse scandal, as well. It follows a lot of what happened in real life, just with fictional names. The doctor that is accused is one that made Hallie feel uncomfortable once, but thankfully nothing more than that happened with her. There’s a lot of talk about backlash online and a hearing scheduled for the doctor, but no type of resolution. I felt like from the synopsis this would be a major part of the plot, but it mostly stayed in the background. Avery and her old training partner come together to create a foundation to help the mental and emotional health of gymnasts and even that is barely addressed.

Overall, Head over Heels was not really for me. I would have liked for things to be more developed. It felt like just the bare minimum was done in terms of character development, relationship development, gymnastic research, and #MeToo details. What should have been interesting and emotional came off as boring and superficial. This is the second book I’ve tried by this author and I think it will probably be my last.

13 thoughts on “Review: Head Over Heels by Hannah Orenstein”