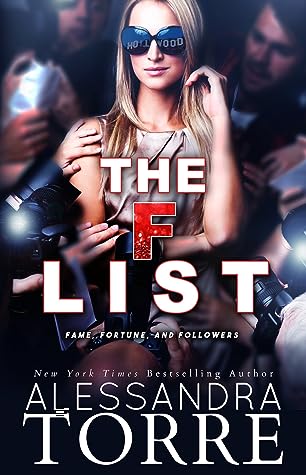 There was a lot I did to get to this point, to get 42 million followers. Some of it I was proud of, most of it I wasn’t.

There was a group of us, all internet celebrities, and everyone wanted in, which is how six of us ended up living in this mansion, a camera always on, the public always watching. Two months and nine carefully scripted TV episodes that would get us more of the three F’s we were desperately chasing.

I knew my role. I was Emma, the unlikeable one. The dark villain with the devious smile. The package of dynamite that would blow up any chance of peaceful living and harmony.

Cash knew his role. He was the good guy. The lovable one. The one that everyone, even the darkest cast member of them all, would fall in love with.

My heart didn’t get that memo.

I loved this! I started reading it on a day that I had already picked up and put down three different books and nothing was keeping my attention. But, as soon as I started The F List, I was hooked.

I thought the story would start with the reality show, but we get to watch Emma’s journey to becoming internet famous before we get there. While I find myself generally not caring about celebrities these days, I find the behind the scenes work really fascinating. It’s crazy how many people are behind a simple social media post and how publicity is manufactured. Reading about Emma’s rise in followers was kind of akin to watching a reality you don’t know why you’re watching, but can’t look away from.

Interspersed with chapters from Emma’s POV are various quotes from interviews and chapters from Cash’s POV. I thought Torre did a great job of making Emma and Cash’s voice distinguishable. I also loved the interview quotes. I thought they were used really effectively and added a lot to the story. I also liked the growth we see in both Emma and Cash. Neither were very likable in the beginning, but I loved both of them by the end of the story. And I was definitely rooting for them to be together.

Speaking of the romance, that’s one of the only pieces I have a little bit of a problem with. It was a little too insta-lovey for me. They meet briefly at a party several years previously where Cash defended Emma when someone was making fun of her, then all these years later she’s still someone he thinks about. I understand Emma’s crush since he “rescued” her and she already had a crush on him before that because he was already a little famous, but I found it a little unbelievable that Cash would still hold a torch for her based on their very brief interaction. That didn’t ruin the love story for me, though. Their next encounter shifts them into an enemies-to-lovers scenario and I enjoyed it. I did really ship them and there were several sweet moments. I also want to mention that while Torre is known for books with more of an erotic edge to them, there are no sex scenes in this book. It made me enjoy it even that much more, to be honest. The only other thing that I didn’t entirely love about the book is that I found the end just a little over the top. I still liked it, though.

Overall, I loved The F List. It was super addicting and I never wanted to put it down. I liked the character’s growth, shipped the romance, and found the whole internet famous plotline fascinating. I loved Torre’s writing style with the use of multiple POVs and quote excerpts, as well. I definitely recommend this one!

13 thoughts on “Review: The F List by Alessandra Torre”