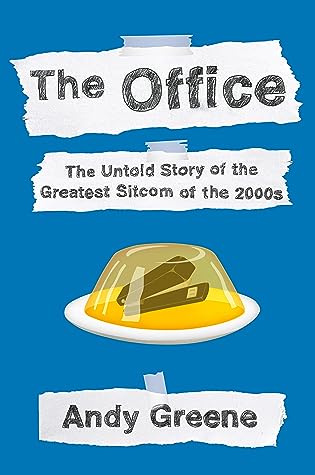 The untold stories behind The Office, one of the most iconic television shows of the twenty-first century, told by its creators, writers, and actors

When did you last hang out with Jim, Pam, Dwight, Michael, and the rest of Dunder Mifflin? It might have been back in 2013, when the series finale aired . . . or it might have been last night, when you watched three episodes in a row. But either way, fifteen years after the show first aired, it’s more popular than ever, and fans have only one problem–what to watch, or read, next.

Fortunately, Rolling Stone writer Andy Greene has that answer. In his brand-new oral history, The Office: The Untold Story of the Greatest Sitcom of the 2000s, Greene will take readers behind the scenes of their favorite moments and characters. Greene gives us the true inside story behind the entire show, from its origins on the BBC through its impressive nine-season run in America, with in-depth research and exclusive interviews. Fans will get the inside scoop on key episodes from “The Dundies” to “Threat Level Midnight” and “Goodbye, Michael,” including behind-the-scenes details like the battle to keep it on the air when NBC wanted to pull the plug after just six episodes and the failed attempt to bring in James Gandolfini as the new boss after Steve Carell left, spotlighting the incredible, genre-redefining show created by the family-like team, who together took a quirky British import with dicey prospects and turned it into a primetime giant with true historical and cultural significance.

Hilarious, heartwarming, and revelatory, The Office gives fans and pop culture buffs a front-row seat to the phenomenal sequence of events that launched The Office into wild popularity, changing the face of television and how we all see our office lives for decades to come.

The Office: The Untold Story of the Greatest Sitcom of the 2000s: An Oral History will be available March 24, 2020.

The Office is one of my all time favorite tv shows. I can’t even tell you how many times I have binged it (though I often skip those last two dumpster fire seasons after Steve Carell left). When I saw this book, I knew I had to read it. I was hoping for lots of behind the scenes trivia and maybe some juicy scandal, but it wasn’t quite what I expected.

The format of the book is mostly excerpts from interviews from people involved with the show – ranging anywhere from cast and crew to Scranton Chamber of Commerce employees. The author did a lot of interviews with these people, but he also utilized other published interviews, quotes from dvd commentary, etc. to fill things in. The quotes are arranged in a way that almost feels like a conversation, but there were often times where it was just quote after quote basically saying the same thing (i.e. everyone commenting on what a hard worker Steve Carell is or how Greg Daniels [the man responsible for adapting The Office from the UK] was the best). It didn’t always work for me and there were a few times where I skimmed through it. Most of the quotes were also from writers, producers, or less central cast members, so I wasn’t always hearing from the people I wanted to the most.

Here are a few things I learned that stood out to me:

Overall, there were enjoyable things in the book, but I wouldn’t consider it a “must read” for The Office fans. While there was definitely a sense of all the the cast and crew being family and loving the show, there was also a whole lot of negativity and blame coming across and it kind of made me like the show less instead of more. It will still be one of my go-to binge shows, though.

6 thoughts on “Review: The Office: The Untold Story of the Greatest Sitcom of the 2000s: An Oral History by Andy Greene”