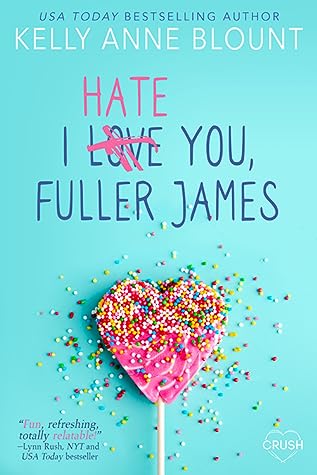 I hate you, Fuller James.

I hate your floppy hair and your lopsided grin and those laughing blue eyes that always seem to be laughing at me.

I hate that you’re the most popular guy in school and I’m still the girl who sneezed and spit out her retainer on someone at a middle school dance. It’s just such a cliché.

I hate that I’m being forced to tutor you in English and keep it a secret from everyone. Because otherwise it might put our basketball team’s chances at winning State in jeopardy, and even though I hate you, I love basketball.

I hate that it seems like you’re keeping a secret from me…and that the more time we spend together, the less I feel like I’m on solid ground. Because I’m starting to realize there’s so much more to you than meets the eye. Underneath it all, you’re real.

But what I hate most is that I really don’t hate you at all.

I was hoping something fun and cute would break me out of my reading rut, but unfortunately I Hate You, Fuller James didn’t end up being that fun or that cute.

The whole tutoring premise started out a little rough for me. The principal of the school straight up blackmails Wren into tutoring the star basketball player. He threatens her with not only multiple days of detention, but suspension because she was caught on video throwing food during a food fight in the cafeteria. The suspension would also mean she would miss out on a prestigious STEM camp. However, if she tutors Fuller, that will be her only punishment. And Fuller’s punishment will be…getting tutored. We later find out that someone else caught on camera throwing food only gets two days of lunch-time detention – which won’t interfere with his spot on the basketball team. So that was all ridiculous enough, but then the basketball coach, who is also Wren’s uncle, asks them both to keep the tutoring a secret. The reasoning is that if the rest of the team finds out their star player may not play in the first game if his grades don’t improve, the team will implode and they’ll never make it to State. That makes perfect sense, right?

So when Fuller is caught by one of his friends going to a the library with Wren for his first tutoring session, he covers for it by making a bet about how he’s hooking up with Wren and will trick her into being his girlfriend and then he’ll dump her. Of course, once he gets to know Wren he realizes she’s the most wonderful girl in all the world and tries to cover his tracks on the bet so she they can be together and she won’t get mad at him.

This book was ridiculous. There were a couple of cute moments here and there, but honestly Fuller just said so many gross things in the beginning of the book that I could never quite like him. Wren was really naive and emotional and very self-involved and I found her a little hard to like, as well. I kept hoping something big would happen later in the story that would make me love it, but it didn’t happen. Even the Big Romantic Gesture, which was based off of two movies I really enjoy, felt very lackluster to me.

Overall, I Hate You, Fuller James left me very underwhelmed. The initial premise with the tutoring didn’t work for me and Fuller’s behavior in the beginning of the book really kept me from rooting for him and Wren later in the story. However, I am definitely not in the target audience age range for this book, so those that are may find this much more enjoyable than I did.

9 thoughts on “Review: I Hate You, Fuller James by Kelly Anne Blount”