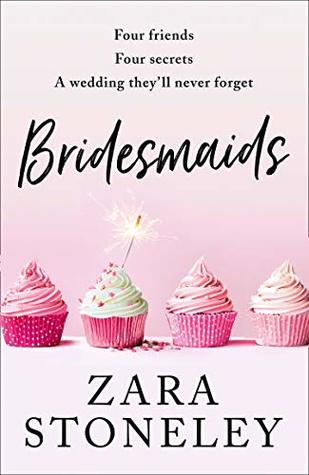 Meet Rachel, the beautiful bride with BIG plans for the perfect day! The venue is a castle and the dress is designer. It’s just a shame her husband is a rat.

Maddie and Sally have only one thing in common – they both love the same man!

Beth is a newly single mum with a mystery baby daddy. Surely the father isn’t someone the girls all know?

And then there’s Jane, the glue holding them all together, but being dumped doesn’t make her the happiest bridesmaid…especially with gorgeous flatmate Freddie complicating things.

Will the bride say, ‘I Do!’? Or will her bridesmaids save the day…and find love along the way?

The most hilarious, feel-good rom com of the year!

Bridesmaids was a fun, quick read that I really enjoyed. I’m going to go the list route on this one.

-Based on the synopsis I thought this was going to be more of an ensemble story with multiple POVs. However, it’s told from the first person POV of Jane, the bride-to-be’s best friend. I had to adjust my expectations a bit, but it worked for me. Jane was a little hard to like at first. She came across pretty self-absorbed and kind of snotty, but as the story went on I liked her a lot more.

-Rachel, the bride, is always described as being so nice and caring and selfless, but I didn’t always get that. I mean, she was nice, but she did lots of selfish things. Jane had recently gone through a pretty terrible break-up right before she was supposed to be married and did not handle it well and is pretty skittish about the whole wedding idea. But, Rachel 100% expects her to be there as a bridesmaid and to even plan her hen party (or bachelorette party to us, Americans), which is where she was dumped by her fiance. Rachel also asks two other women to be bridesmaids even though one of them is now married to the other one’s ex-boyfriend, who is definitely not over the break-up. It was kind of a train wreck sometimes, but I couldn’t look away.

-I think my favorite thing about the book was Freddie, Rachel’s flatmate. He was so funny and sweet and wonderful. I loved every scene he was in. I loved his friendship with Rachel and I loved how their relationship turned to more than friends. I shipped them so hard.

-There are are several secrets and scandals between the wedding party. I’ll admit one of my pet peeves in books is when one honest conversation could solve all the problems. But, it didn’t really bother me here. As I said earlier, sometimes when they all got together it was kind of like a train wreck, but it was an entertaining one I had to keep reading. I thought the identity of Beth’s baby’s father was kind of obvious, but it added to the soap-opera like drama and I was here for it.

Overall, I really enjoyed Bridesmaids. While I did have some issues with some of the characters’ behavior, the story was full of Lifetime level drama and was exactly the type of read I was in the mood for. I also absolutely loved Freddie and his relationship with Jane. This was my first book by Stoneley, but I plan on checking out more of her books when I’m in the mood for some good Chick Lit.