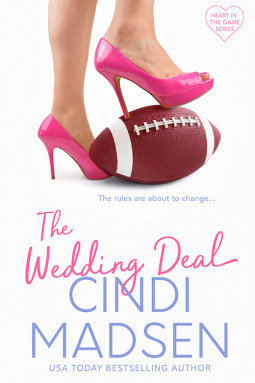 Former quarterback Lance Quaid just inherited the most losing team in the NFL. He’s got only a few weeks until draft day to turn things around, and after firing more than half his staff, he can’t do it alone. Thankfully, his HR manager is more than capable, if only she’d stop focusing on “due diligence” and stop looking so sexy while she’s yelling at him.

Charlotte James has made a life out of following the rules. But nothing could have prepared her for Lance Quaid––he’s a human resources nightmare. The man is brash, has no filter, and, as her new boss, is constantly relying on her to cover his ass. Which is admittedly quite nice.

When Lance begs her to join him on a trip down the coast for his brother’s wedding so they can finalize details––on a strictly business basis––she agrees…after they fill out the necessary forms, of course. Away from the office, though, sparks start flying as the team starts coming together. But both of them know anything more than the weekend would be a colossally bad idea––after all, the extra paperwork would be a nightmare.

I’ve enjoyed several Cindi Madsen books and thought The Wedding Deal looked like the perfect book to feed my Contemporary craving. While I did like it, I didn’t enjoy it as much as I hoped I would.

I felt the book was much longer than it needed to be. I thought there was too much repetition and the story dragged a little bit. There’s only so many times I need to hear how distracted a character is by their attractive co-worker’s [insert body part here]. I also really dislike long chapters and the majority of the chapters were much longer than I prefer.

That said, I did really enjoy the romance. I thought Lance and Charlotte complemented each other so well, professionally and personally. While there was a little too much of the whole “he/she is so attractive” rhetoric, there was also a lot of discussion about how smart, caring, funny, and hard-working each other were. They helped make each other better, too. I really appreciated that the romance was based on so much more than the physical and I definitely shipped them.

Overall, I enjoyed The Wedding Deal. While it was a little too long for my taste, I did really like the romance and the sweet relationship Charlotte and Lance developed. I also thought the story was set apart a little bit from the normal Sports Romance by focusing on the owner of a team instead of a player. I would recommend it to someone looking for a light romance and doesn’t mind long chapters.

7 thoughts on “Review: The Wedding Deal (Heart in the Game #1) by Cindi Madsen”