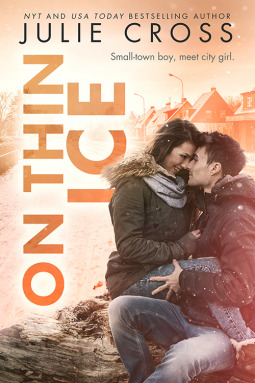 Jake Hammond, current prince of Juniper Falls, captain of the hockey team, and player with the best chance of scoring it big, is on top of the world. Until one hazing ritual gone wrong lands him injured, sitting on the sidelines, and―shocking even to him―finding himself enjoying his “punishment” as assistant coach for the girls’ team.

As Jake and Brooke grow closer, he finds the quiet new girl is hiding a persona full of life, ideas, and experiences bigger and broader than anything he’s ever known. But to Jake, hockey’s never just been a game. It’s his whole life. And leveraging the game for a shot at their future might be more than he can give.

Each book in the Juniper Falls series is STANDALONE:
* Off the Ice
* Breaking the Ice
* On Thin Ice

I have liked the other books in the Juniper Falls series, but I really loved On Thin Ice. It completely surpassed my expectations and I enjoyed it so much that I already want to re-read it.

I found both Jake and Brooke really likable characters. They both have had rough things happen in their lives and I felt like their reactions made sense for their age and situations. I also really loved them together. Their relationship didn’t have the best start, but I loved how it developed. I also really enjoyed seeing characters from the previous books like Tate, Claire, Fletcher, and Stellers.

I thought the hockey hazing storyline was well done. Over the course of the series we’ve seen how toxic the environment can be and how hockey players are given a lot of slack in the town, but it all really comes to a head here. I was glad to see the behavior was finally addressed and that it was the players themselves that brought it forward. It was a refreshing take on such a serious topic. I do wish that the issues with Brooke’s family were given a little more attention, though. Topics like self-harm and a suicide attempt are brought up and pretty quickly dismissed.

Overall, I just really loved On Thin Ice. I enjoyed the characters, the friendships, the romance, and the addictive writing. I really never wanted to put this one down. I recommend this one to fans of YA Contemporaries.