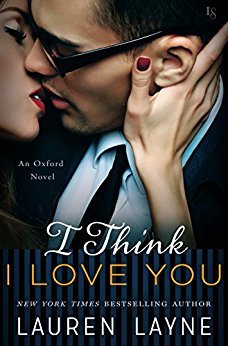 Brit Robbins knows that dating in New York City is hard—she just hoped to have it mastered by age thirty. But after yet another promising suitor says they have no sparks, Brit decides it’s time to torch her dating game and try a new plan. And who better to coach Brit through the art of seduction than the guy who first gave her the “let’s be friends” card?

Hunter Cross has always figured there’s nothing his best friend Brit can do to surprise him. But Brit’s request is a surprise he doesn’t see coming—and one he’s definitely not prepared for. Hunter and Brit have always been careful to keep things perfectly platonic, but the fake dates and faux flirting are starting to feel like the real deal. And soon Hunter realizes he has taught Brit too well. Not only has she become an expert at seduction, the man becoming thoroughly seduced is him.

To be honest, the synopsis for I Think I Love You almost scared me off. Anything where the plot sounds like it’s centered around a physical relationship is not generally my thing. However, I’ve learned that when it comes to a Lauren Layne book, it’s always best to give her the benefit of the doubt and I’m once again glad I did. While there were a few of the too-graphic scenes I don’t really appreciate, there weren’t more than her other books I’ve read have had.

One of my favorite Romance tropes is Friends-to-More and I Think I Love You utilized it really well. I loved Brit and Hunter’s friendship. I’m really glad that we got to see them together as friends before they really began to fall for each other. I was expecting the “lessons in seduction” to be kind of cringe-worthy and they really weren’t. It was mostly Hunter reinforcing to Brit that there wasn’t anything wrong with her and she just needed to be relax and be herself.

This is the last book in the Oxford series, which is also connected to another book series from Layne. However, this is the first book from either series I’ve read. There were a lot of side characters that were kind of hard for me to keep track of, being unfamiliar with the couples from the previous books, but I think fans of the series will be pretty happy with the cameos. They did make me want to go back and read some of the books I’ve missed.

Overall, I really enjoyed I Think I Love You. It was a quick, cute read (I read it in a day) with likable characters. Lauren Layne continues to be one of my favorite Romance authors and I’m really looking forward to whatever she writes next.