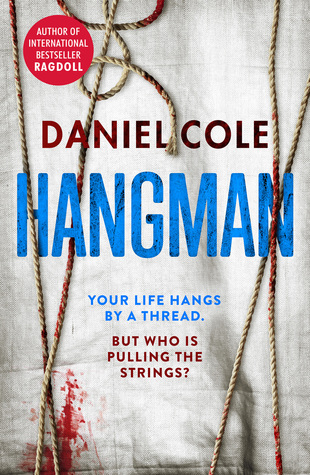 How do you catch a killer who’s already dead?

Eighteen months have passed, but the scars the Ragdoll murders left behind remain.

DCI Emily Baxter is summoned to a meeting with US Special Agents Elliot Curtis of the FBI and Damien Rouche of the CIA. There, she is presented with photographs of the latest copycat murder: a body contorted into a familiar pose, strung up impossibly on the other side of the world, the word BAIT carved deep into its chest.

As the media pressure intensifies, Baxter is ordered to assist with the investigation and attend the scene of another murder to discover the same word scrawled across the victim, carved across the corpse of the killer – PUPPET.

As the murders continue to grow in both spectacle and depravity on both sides of the Atlantic, the team helplessly play catch up. Their only hope: to work out who the ‘BAIT’ is intended for, how the ‘PUPPETS’ are chosen but, most importantly of all, who is holding the strings.

Ragdoll was my favorite book of 2017 and I have been anxiously waiting for the follow-up ever since. Though the American release date is not for a couple more months, I won a giveaway for a book of my choice and was very excited to see I could get a UK edition of Hangman. While it didn’t quite live up to all my expectations, it was a well-written, engrossing mystery.

I’m going to get what I didn’t like about it out of the way first. You know how some people say “religion in a book ruins it for me”? Well, I am kind of the opposite. A strong Anti-God theme and mocking religion can ruin it for me. The book basically starts out with a character saying there is no God and it really just started me off on the wrong foot with the story. Any mention of God or religion throughout the book was condemning and I found it kind of offensive. While I wouldn’t say the atheism was a strong theme throughout the plot or anything, it was kind of brought up several times and I have to say it diminished my enjoyment a bit.

I thought the overall mystery was well-done. It was methodical and intriguing and suspenseful. Cole did a good job of making the atmosphere very tense and – at times – creepy. There was still some of the dark humor I appreciated from Ragdoll, but I didn’t think it was as funny as the first book.

After the events of Ragdoll unfolded, I really didn’t know how this William Fawkes series could continue. Hangman shifts focus to really shine the light on Baxter. I kind of hated Baxter in the first book and I have to say I don’t really like her any better here. She is smart and determined, but she’s deeply paranoid, self-centered, and abrasive. She is an interesting character, but it was kind of hard to care about her. Thankfully, my dear, sweet Edmunds was back, too. I absolutely adored him in the first book and continued to in this one. I also really enjoyed the introduction of CIA Agent Rouche. He was quirky and sad and I kind of loved him.

Overall, I did enjoy Hangman. I really like Cole’s writing and how he can mix humor in with such dark subjects. I liked the mystery and most of the characters. While I was offended by the mocking of religious beliefs and it did lessen my enjoyment a bit, it didn’t all out ruin the book for me. The very ending really has me looking forward to what will happen next.