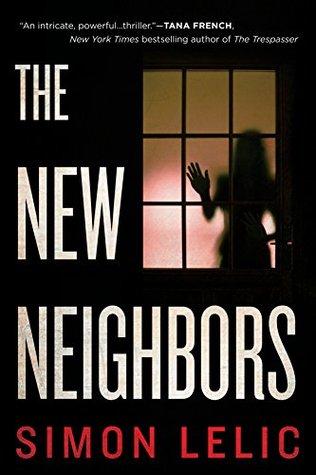 What if your perfect home turned out to be the scene of the perfect crime?

Londoners Jack and Syd moved into the house a year ago. It seemed like their dream home: tons of space, the perfect location, and a friendly owner who wanted a young couple to have it.

So when they made a grisly discovery in the attic, Jack and Syd chose to ignore it. That was a mistake.

Because someone has just been murdered. Right outside their back door.

And now the police are watching them…

I found The New Neighbors to be a pretty standard psychological thriller (and I’m using the word “thriller” loosely). The writing wasn’t bad, but I just found myself pretty underwhelmed with the plot and the characters.

I thought the synopsis sounded pretty intriguing. I thought the house and the neighborhood was going to provide a really creepy atmosphere. However, I don’t feel like the house played that big of a role. In the beginning there was a good deal of description of it, but I felt like after being told it was creepy a couple of times, that was kind of it. And the “grisly discovery in the attic” was a pretty big letdown, as well.

I’ve seen lots of reviews talking about the journal formatting, but it didn’t really work for me. In the first part of the book we get alternating 1st person POVs from Jack and Syd and we’re told they’re writing everything down so they can hand it over to the police. I was never sure if there were parts of those chapters that were supposed to be regular narrative or if everything we were reading was supposed to be a journal. With few exceptions, it just didn’t read like journal entries. It read as very straightforward regular narration. In the second half of the book they are done with the journaling and the style was not any different than the first half. I thought that Jack and Syd’s voices were very distinct in the very beginning, but as the book went on, they sounded exactly the same.

I didn’t think the “surprises” were done very well. A lot of things are alluded to throughout the book that are supposed to help build suspense, but when things were finally revealed I just didn’t find them to be very impactful or surprising. To be honest, I just felt let down by the direction the “mystery” went. I found the ending very underwhelming.

Overall, The New Neighbors was a little disappointing to me. The main idea and the writing itself weren’t bad, but the formatting, the characters, and the progression of the plot were lacking. I think people who don’t read a lot of this genre and like character-driven stories would probably enjoy this a little more.

14 thoughts on “Review: The New Neighbors by Simon Lelic”