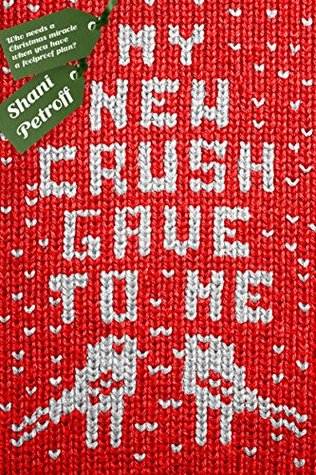 Charlotte “Charlie” Donovan knows what she wants for Christmas: Teo Ortiz. He’s a star athlete, in the National Honor Society, invited to every party, and contributes to the school paper (where Charlie is co-editor). Basically, he’s exactly the type of guy Charlie’s looking for. The only problem—he barely knows she exists.

But Charlie has a plan: Rig the paper’s Secret Santa and win his heart with five perfect gifts. Enter J.D. Ortiz—Teo’s cousin, and possibly the most annoying person on the planet. He’s easy going, laid back, unorganized, and spontaneous—the exact opposite of Charlie (and Teo). But he knows what Teo wants, so she’s stuck with him.

Yet the more time Charlie spends with J.D. the more she starts to wonder: Does she really know what, or rather who, she wants for Christmas?

-There are a lot of YA books out there that I think are far too adult for the age group they’re marketed in, but I didn’t have that problem with this book. It seems geared more towards the younger end of the YA spectrum and is pretty clean. It’s the perfect amount of light and fluffy for a fun Christmas read.

-I liked the characters. Charlie is very Type A and likes to be in control, but she means well. Her best friend Morgan did a good job of balancing her out. JD is the polar opposite of Charlie, of course, and they often butt heads. As they come to spend more time with each other they begin to understand each other better and become friends. They had some sweet moments together and I shipped them.

-I love that cover! There’s an ugly Christmas sweater party in the book so it even ties in to the story well.

-Though I generally don’t like anything Holiday related until after Thanksgiving, this book did get me into the Holiday mood. I enjoyed all the holiday baking and liked the Secret Santa idea.

What Didn’t Quite Work for Me:

-I couldn’t really get on board with Charlie’s sudden crush on Teo. She basically just knew some stats on him when she decided he was The One. The way she read way too much into every interaction she had with Teo did remind me of being in high school, but it also kind of frustrated me. I also got frustrated by how clueless she was when it came to JD. A lot of the moments between them I thought were so sweet were kind of lost on her.

-I thought the end was  a little too abrupt. Things worked out very easily, very quickly for Charlie once she realized who she really wanted and I would’ve liked her to have to work a little bit harder for the happy ending.

Overall, I enjoyed My New Crush Gave to Me. It was light and cute with likeable characters, even if Charlie was frustrating sometimes. I definitely recommend it to fans of YA Contemporary holiday reads.

9 thoughts on “Review: My New Crush Gave to Me by Shani Petroff”