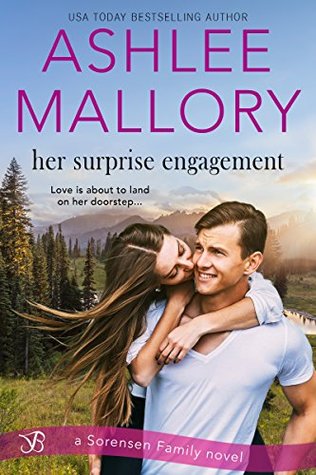 Single mom Daisy Sorensen doesn’t believe in fairytale endings—at least not for her. All she wants is to enjoy a much-needed, stress-free family vacation at a friend’s Lake Tahoe home. So of course everything that can go wrong does. Including a gorgeous man and his daughter showing up in the middle of the night.

Soon-to-be Governor Jack Harrison has had a crazy week, but he’s sure nothing can top arriving to find a bathrobe-clad, beautiful stranger in the home he’s staying in for the week. He’s wrong. When things spiral out of control the next morning, Jack makes Daisy an offer she can’t refuse. She’ll pretend to be his fiancée and he’ll help her open the bakery she’s been dreaming about.

But in between late-night campfires and days on the lake, Jack finds himself falling for the strong, stubborn woman for real.

In Her Surprise Engagement we focus on the last of the Sorensen siblings, Daisy. Daisy has recently become a single mother and she’s determined to prove that she can provide for herself and her three children. She frustrated me at times because that determination came off as prideful and it didn’t seem like good parenting to turn things down that would be beneficial to her kids. However, as we get to know her a little better we see how it’s not so much pride keeping her from asking for help, but the fear of once again being in a position where she relied solely on someone else for support and how hard it would be to pick up the pieces of her life again if that support leaves. I liked how she learned that accepting some help sometimes didn’t mean she would lose her independence.

The fake-relationship storyline is always one of my favorites to read about and I liked that it was incorporated here. I thought the events that led up to it were humorous. I did think that the fake relationship turned real a little too fast, though. Jack is a love-at-first-sight kind of guy and while I thought he was sweet and romantic and did like him and Daisy together, it was a little too insta-love for me to really get behind it. They only know each other for a couple of weeks before he’s all in and I would’ve liked to have seen their relationship develop a little more before that.

Overall, I enjoyed Her Surprise Engagement. I enjoyed re-visiting the Sorensen clan one more time and thought this book did a good job of showing us all their Happy Ever Afters. I would definitely recommend this to fans of the series and Contemporary Romance.

11 thoughts on “Review: Her Surprise Engagement (The Sorensen Family #4) by Ashlee Mallory”