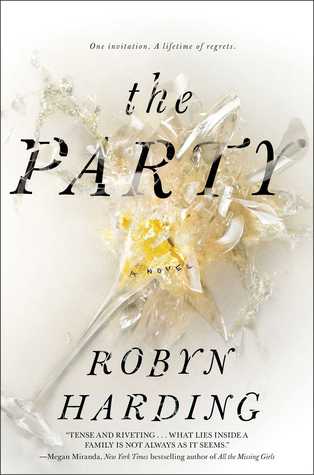 In this stunning and provocative domestic drama about a sweet sixteen birthday party that goes horribly awry, a wealthy family in San Francisco finds themselves entangled in a legal battle, their darkest secrets revealed, and their friends turned to enemies.

One invitation. A lifetime of regrets.

Sweet sixteen. It’s an exciting coming of age, a milestone, and a rite of passage. Jeff and Kim Sanders plan on throwing a party for their daughter, Hannah—a sweet girl with good grades and nice friends. Rather than an extravagant, indulgent affair, they invite four girls over for pizza, cake, movies, and a sleepover. What could possibly go wrong?

But things do go wrong, horrifically so. After a tragic accident occurs, Jeff and Kim’s picture perfect life in a wealthy San Francisco suburb suddenly begins to unravel. A lawsuit is filed that irrevocably changes their relationship, reveals dark secrets in the Sanders’ marriage, and exposes the truth about their perfect daughter, Hannah.

Harkening to Herman Koch’s The Dinner, Christos Tsiolkas’s The Slap, and Liane Moriarty’s Big Little Lies, The Party takes us behind the façade of the perfect family, exposing the lies, betrayals, and moral lapses that neighbors don’t see—and the secrets that children and parents keep from themselves and each other.

This is a hard book for me to review. On the one hand, I kind of hated pretty much everything about it. But on the other hand, I couldn’t stop reading it.

The characters are awful people. All of them. All the time. I thought maybe Jeff and Kim had just been through some bad times and they would get better as the story went on. They did not. Their daughter, Hannah, and her friends were all awful. Lisa, the mother of the girl to get hurt at Hannah’s party, is awful. All of Jeff and Kim’s friends are just as horrible – the one exception being Lisa’s boyfriend, Allan, who tried to be the voice of reason in her vendetta against the Sanders. It seemed like every time a character was faced with a decision they chose the wrong one. At first I was getting so upset over their actions, screaming at them in my head to stop being idiots. But around halfway through the story, I became a little more resigned to their behavior and just began waiting for the next stupid thing. There is no one to root for in this book, so for awhile I was just rooting for all of them to have their comeuppance. Unfortunately, I didn’t find the ending to be satisfactory at all.

Even though I hated all the characters, I just kept reading. At first I wanted to see the characters redeem themselves, but even after I realized that wasn’t going to happen I still wanted to see what happened. The story is told through the POVs of Kim, Jeff, Lisa, and Hannah and I thought they were all done effectively. Even though I hated them, it has to say something about the writing that I still wanted to keep reading about them.

Overall, The Party has good writing and an interesting premise, but I absolutely hated all the characters. For awhile I did enjoy hating them, but I found it really unsatisfying that they didn’t get the level of comeuppance I was hoping for, nor did they really seem to learn anything from the experience. I’m bumping my rating up a little bit, though, because the author still made me keep reading, despite my feelings about the characters.

7 thoughts on “Review: The Party by Robyn Harding”