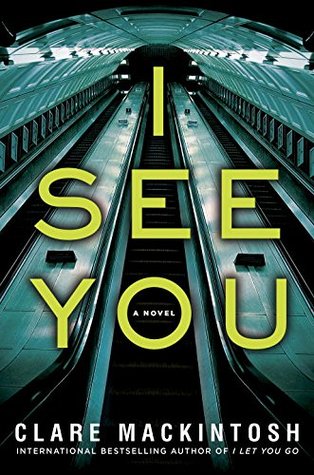 Every morning and evening, Zoe Walker takes the same route to the train station, waits at a certain place on the platform, finds her favorite spot in the car, never suspecting that someone is watching her…

It all starts with a classified ad. During her commute home one night, while glancing through her local paper, Zoe sees her own face staring back at her; a grainy photo along with a phone number and a listing for a website called FindTheOne.com.

Other women begin appearing in the same ad, a different one every day, and Zoe realizes they’ve become the victims of increasingly violent crimes—including murder. With the help of a determined cop, she uncovers the ad’s twisted purpose…A discovery that turns her paranoia into full-blown panic. Zoe is sure that someone close to her has set her up as the next target.

And now that man on the train—the one smiling at Zoe from across the car—could be more than just a friendly stranger. He could be someone who has deliberately chosen her and is ready to make his next move…

It took me a little while to get into I See You. It starts out a little slow, mostly establishing the characters. But once it fully settles into the main mystery I was hooked.

The story follows Zoe, a woman who finds her picture advertising a dating site she’s never heard of in the paper, Kelly, a police office trying to gain some redemption from past mistakes, and snippets from the anonymous villain. At first I found the switch in POV between Zoe and Kelly a little jarring, almost feeling like they were two completely different stories. Once we get further into the story, though, I found myself really enjoying each perspective. While they both had their flaws, they were likable characters that I was rooting for the whole time. I also really liked Kelly’s new DI, Nick.

I thought the author did a good job of conveying Zoe’s paranoia. While the book didn’t really have the creepy atmosphere I was expecting, it snuck up on me later, when I wasn’t reading. The idea of how most of us are creatures of habit and how easy it would be for anyone to use that predictability against you is a scary thought. I’ve always been someone who closes all the blinds as soon as it gets dark enough outside for people to be able to see in. The thought of being watched has always creeped me out and I think this book will make me a little more paranoid than I already am.

The mystery was pretty well done. I suspected several people of being behind the website all throughout the book and while the villain was one of my suspects, it still surprised me. I think it worked, though. And I LOVED the ending.

Overall, I enjoyed I See You. Though it started out a little slow for me, it did end up really sucking me in and I had a hard time putting it down. The mystery was well done and kind of terrifying in how plausible it is. I would definitely recommend it to mystery/thriller fans. Just be prepared to be looking over your shoulder after you do.

10 thoughts on “Review: I See You by Clare Mackintosh”