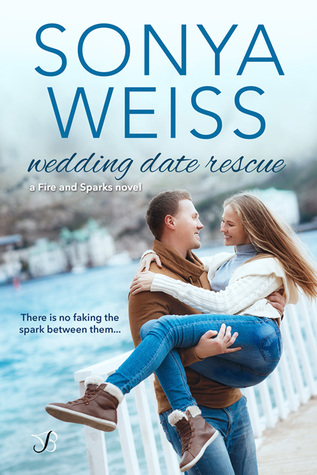 As a Firefighter, Kent Wakefield has been burned before, and not just by fire. So when Casey Bradford, his best friend’s off-limits, gorgeous little sister, asks him to be her fake boyfriend, he flat out refuses. He doesn’t do relationships, real or otherwise. But when his well-meaning, marriage-pushing mother corners him about his cousin’s wedding, he panics and tells her he has a date.

After being left at the altar, Casey is out of options. She needs a boyfriend ASAP or she can kiss her dreams good-bye. Who better than her brother’s emotionally unavailable best friend, Kent. She may have nursed a childhood crush, but this arrangement will be purely platonic…that is until he kisses her and suddenly it gets a lot harder to remember it’s all pretend.

After reading a pretty heavy, emotional book I really needed something light and fun and Wedding Date Rescue was exactly that. Casey is a professional matchmaker who was recently left at the altar. Her business is declining and her investors are worried. It’s suggested that she find a new man and quick – even if it’s just for show – so her investors don’t lose faith. She decides her relationship-phobic friend, Kent, is just the guy for the job, but he’s resistant. However, with his ex-girlfriend coming back to town and his mother pushing every eligible woman she find in his direction he decides the fake relationship with Casey could work.

I really liked both Casey and Kent. I liked their friendship and how they could joke with each other. The fake relationship trope is my favorite romance subject and I thought theirs was done pretty well. I enjoyed watching as each fake outing and kiss developed more and more into real feelings. Their relationship was really cute.

I wish we would’ve gotten a little more background information on them, though. We know that Casey was left at the altar and that her ex-fiancé, Dominic, was a friend before they started dating, but we never find out how they got together or why they didn’t work out. We find out Kent had been in an accident while working as a firefighter and the fallout included one of his friends dying and his girlfriend dumping him. But we don’t really get much information about his injuries or what his relationship with his ex was like. The whole thing seemed just kind of thrown in for an added bit of a drama and I thought it could have been a lot more explored.

Overall, though, I enjoyed Wedding Date Rescue. I liked the characters and the romance. It was light and fun and just what I needed right now. I definitely recommend it to fans of fake relationship storylines.