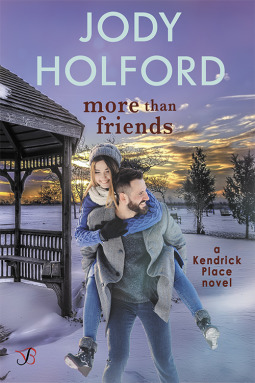 Owen Burnett planned on a quiet, easygoing Christmas, hanging out with his best friend and neighbor, Gabby Michaelson. So when his mom pressures him to come home for the holidays, he tells a little white lie…that he’s spending the holidays with his new girlfriend. But when his family shows up unexpectedly, Owen pulls the best friend card and asks Gabby to play his fake girlfriend.

Gabby’s been hopelessly in love with her best friend Owen for what feels like forever, but playing his “fake” girlfriend when the entire boisterous Burnett clan visits is easier said than done. The more she tries to deny the attraction between them, the more obvious their chemistry becomes. But even though she’s not the only one feeling it, putting their friendship on the line is a risk she can’t take.

*What Worked for Me*

-I am a sucker for a fake relationship story and this book did it fairly well.

-I liked Owen a lot. He was sweet and smart. I found his preference for quiet and small groups really relatable. I also enjoyed his family, though they could have been developed just a little more.

-I liked the friendship between Owen and Gabby. I felt like they were really best friends before the romance started.

-There are no graphic love scenes in this book. There is one scene in the epilogue that approaches the threshold, but never really goes there. I like my romance books to stay in the sweet range and this one was definitely sweet.

*What Didn’t Work for Me*

-The thing with fake relationship stories is that the romance is a slow burn. It comes as a surprise to at least one of the characters, if not both (though usually not to the readers). So Gabby already being in love with oblivious Owen worked fine. But where it went off track for me was that in the very first chapter before the fake relationship had even started Owen was starting to notice and become attracted to Gabby. Before they even had to play fake couple in front of his family they were both already having feelings for each other and it was just too fast for me.

-There was something Gabby says early on in the story that really rubbed me the wrong way.

And now she knew he loved her, in the safest way possible. The most platonic, means-nothing way he could. Which, in her book, was the same as not at all.

Owen viewed Gabby as his best friend. He was always there for her. He supported her all the time. He loved her. He might not have been in love with her (or didn’t know that he was), but he loved her and for her to basically say it was worthless is such an awful, selfish, immature thing. I will say, however, that that line isn’t really consistent with her character in the rest of the book, so I could still like her well enough. (Also note the quote above is taken from the ARC )

-There was a plot line involving a sleazy building manager and thefts, and an introduction of lightly developed characters that lived in the building that really didn’t have anything to do with Owen and Gabby’s story. I don’t think it did anything but set up for future books in the series.

-The end was a little over the top mushy for me. Don’t get me wrong, I want the romantic Happily Ever After, but all the proclamations got a little much and I was rolling my eyes a lot.

Overall, More Than Friends was a cute, holiday romance. While I did have a few issues with the development of the story and characters, it was quick and sweet and pretty much what I wanted it to be. I recommend it to fans of holiday romances.

6 thoughts on “Review: More Than Friends by Jody Holford”