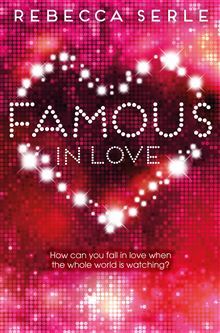 When Paige Townsen gets plucked from high school obscurity to star in the movie adaptation of a blockbuster book series, her life changes practically overnight. Within a month, Paige has traded the quiet streets of her hometown for a bustling film set on the shores of Maui, and she is spending quality time with her costar Rainer Devon, one of People‘s Sexiest Men Alive. But when troubled star Jordan Wilder lands the role of the other point in the movie’s famous love triangle, Paige’s crazy new life begins to resemble her character’s.

In this exciting tale of romance and drama, both on-and offscreen, Paige must adjust to a crazy new life without the daily support of her friends and family, while figuring out who she is—and who she wants—as the whole world watches.

Famous in Love was a really quick, easy read. I read about the first half of it one sitting and only stopped because I made myself go to bed since I had work in the morning. While neither the writing or the plot really blew me away, there was something about it that I just couldn’t stop reading.

Paige is an average high school girl who is plucked out of obscurity during an open casting call for the next big movie franchise, based on a best-selling Young Adult book series (think the Twilight phenomena). She starts filming with the very famous and charming Rainer and a relationship begins to blossom. Then Rainer’s arch-enemy Jordan is cast as the second male lead and Paige starts to have feelings for him, too. Requisite love triangle angst ensues. But to keep the story interesting (because really if this was just another love triangle story I don’t think I could’ve made myself finish it) there are glimpses of what happens behind the scenes of making a movie and Paige begins to grow up.

Paige was a mostly likable character. Throughout the whole book she stayed pretty grounded and while she did realize her life was going to change, she never really let the idea of fame get to her head. She learned about forgiveness and sacrifice and what’s really important in life. While she still has a lot of growing up to do, I think she did get a good start during the course of the book and I appreciated that.

I was kind of ambivalent about the love triangle. At various times I leaned in the direction of one or the other, but for the most part I wasn’t ever really Team Rainer or Team Jordan. I liked how easy-going Rainer was and that he really did seem to want to help Paige navigate the business and take care of her. I didn’t really like the 5 year age difference – he’s 22 and she’s 17. It almost seemed like he was manipulative at times or, like, preying on her naiveté and youth. At the end of the day, I don’t think he was that calculating, but it still rubbed me the wrong way a bit. Paige and Jordan’s relationship was far too insta-lovey for me. I never felt the connection between them that Paige was always talking about. He was kind and sweet, but for the most part he was just kind of broody and I don’t think I got to know him well enough to ship him with Paige.

Another thing that kind of threw me off a bit was how large parts of the plot were just skipped over. In one scene Paige is auditioning for the movie and the next she’s already been on set for awhile. While I can appreciate the “just-get-on-with-it” attitude, I felt like there was a lot missing not seeing her find out she was cast, preparing to leave her family and friends and home, her first day on a movie set, and etc. While I don’t think we need to see every single day from the audition to the premiere, we did jump large portions of time and it was a little jarring. I also thought it was kind of odd that for wanting to be an actress she didn’t really know anything about celebrities.

Overall, I did enjoy Famous in Love. I wanted to read to see if I would be interested in watching the show when it comes next year and I am, though I’m already a little annoyed about how different it looks from the book. I wanted something light and fun and this definitely fit the bill. I enjoyed the behind the scenes look at making a movie and the Hawaiian setting (fun fact, when I was very young I lived on Maui for a couple years where the movie set is) and it was the perfect bit of escapism I was looking for.