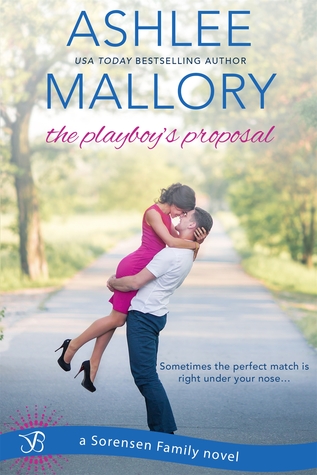 Doctor Benny Sorensen has had it up to here with her party-throwing playboy neighbor. She’s declaring war. She doesn’t care how gorgeous or charming he is, he’s going down. That is until he proposes something she’s not sure she can say no to…

Wealthy ad man Henry Ellison lives an uncomplicated life that revolves around work, women, and partying. In that order. Until Benny storms into his life. To placate his attractive but hotheaded neighbor, Henry offers to help her land a date with the man of her dreams. Only as Henry makes her over and coaches her on the fine art of flirting, he realizes that the idea of this woman in any other man’s arms but his own is unacceptable. But Benny’s a forever kind of girl and forever might just be the one commitment he can’t make.

Each book in the Sorensen Family series is a standalone, full-length story that can be enjoyed out of order.
Series Order:
Book #1 Her Backup Boyfriend
Book #2 Her Accidental Husband
Book #3 The Playboy’s Proposal

I’ve been in the mood recently for a cute romance and The Playboy’s Proposal was the perfect book for my mood. It had great characters and a cute, slow-burn romance that makes me want to break my self-imposed rule to never use the word “swoony” in a review.

Benny Sorenson (the youngest of the Sorenson clan, who we’ve gotten to know from the first two books in the series) has a major crush on another doctor in her practice, but lacks the confidence to do anything about it. I found her spazzy behavior around cute guys to be really relatable, as was her lack in self-confidence. When she finally makes a formal complaint to the HOA about her excessively loud neighbor, Henry Ellison, he makes a deal with her. He’ll help her become more confident with men if she drops the complaint.

Benny and Henry begin to spend time together – clothes shopping, makeovers, golf lessons. But they also begin to just hang out together, watching Property Brothers and drinking wine, becoming friends. Though the book doesn’t span a whole lot of time, the romance still seemed like a slow-burn, which I always like. They really became best friends as they fell in love. There’s obviously some roadblocks along the way – Benny’s lack of confidence and Henry’s disbelief in love and I liked the way those problems were reconciled. I really liked both characters and I loved seeing them together.

Overall, The Playboy’s Proposal, was a cute, quick, romantic read with likeable characters. I enjoyed seeing the Sorenson clan again and am looking forward to Daisy’s story. I would recommend this to fans of romance.

4 thoughts on “Review: The Playboy’s Proposal (The Sorenson Family #3) by Ashlee Mallory”