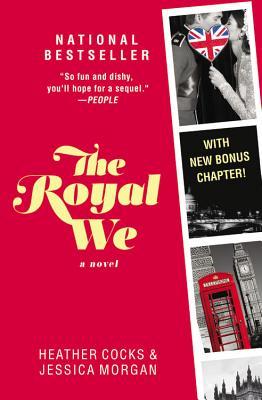 American Bex Porter was never one for fairy tales. Her twin sister Lacey was always the romantic, the one who daydreamed of being a princess, but it’s adventure-seeking Bex who goes to Oxford and meets dreamy Nick across the hall-and Bex who finds herself accidentally in love with the heir to the British throne. Nick is wonderful, but he comes with unimaginable baggage: a complicated family, hysterical tabloids tracking his every move, and a public that expected its future king to marry a Brit. On the eve of the most talked-about wedding of the century, Bex looks back on how much she’s had to give up for true love… and exactly whose heart she may yet have to break.

I was not one of those people obsessed with the Royal Wedding several years ago. When my roommate at the time asked me if I was going to get up early to watch it (like apparently all his co-workers were doing), I told him I wasn’t interested in seeing yet another person get married before me. So even though I wasn’t obsessed, I also don’t live under a rock. I know enough about Prince William and Kate to know that The Royal We is very heavily inspired by them (a lot of people even call it Kate Middleton fanfiction). And it doesn’t bother me one bit. This book is not perfect – it’s overly long, often cheesy, filled with clichés, but I quite thoroughly enjoyed every page of it!

I expected a really cutesy romance – we would see Nick and Bex fall in love, have some chuckle-worthy struggles planning the wedding, and live happily ever after. And while we get all that, there is so much more going on in this book. It spans eight years and many, many ups and downs. There is so much more emotion and character development than I expected and I was so pleasantly surprised by it.

The romance was cute, but also seemed pretty real and relatable (which is saying something since one half of this relationship is the heir to the British throne and is basically a fairytale). While I wasn’t completely thrilled with how they got together, I did really root for them and was happy when they finally became a couple. But it wasn’t a “Ring by Spring” relationship where they get married straight out of college. I really liked that we got to see them after college – for several years. It really shows how relationships can change as you grow up and how different kinds of problems can arise. They had a lot of ups and downs before finally getting it right, but I thought the ending was so much more satisfying after watching them work so hard for it – even though I did often want to bash Nick in the head throughout a good portion of the book.

In addition to the romance, there is a big family element to the story. I loved Bex’s relationship with her parents – especially her father. They are always there for her and support her and give her the tough love when she needs it. Conversley, Nick’s relationship with his parents is pretty awful. His mother is heartbreakingly absent and his father is a royal douche. Also playing large parts in the story are Bex’s twin sister, Lacey, and Nick’s younger brother, Freddie. I pretty much hated Lacey. Her behavior was so jealous and petty and desperate and she just never seemed to learn her lesson. While she did redeem herself by the end, it was too little, too late for me to like her. I loved Freddie, though! He’s your typical “spare” in these type of stories, lives life like it’s a big party because no one expects anything from him and while his behavior did often annoy me, he really grew on me. He’s funny and he’s a great friend and brother. The copy of the book I read had a bonus chapter at the end from his POV and it just made me love him more. My poor little heart could hardly handle it. I would totally read a Freddie spin-off book.

I also really enjoyed Bex and Nick’s group of friends. They were BFFs in college and stayed friends afterwards. They were such a diverse group of characters and I really felt like I got to know them. They provided a lot of laughs and instigated some drama, but also each had their own storyline – apart from how they played into the central romance plot. While they probably wouldn’t be people I would hang out with in real life, I really enjoyed spending time with them inside the pages.

Overall, I really did love The Royal We. I don’t think everyone will, though. It’s long and it often felt too long (there were parts I felt like doing a good deal of skimming), but since the characters were so well developed I enjoyed just spending time with them and seeing what happened. I liked the romance and the characters and even the royal family aspects of the story. It was a fun, addictive read and it’s one I know I will be re-reading again.

14 thoughts on “Review: The Royal We by Heather Cocks and Jessica Morgan”