She is the most powerful Jinni of all. He is a boy from the streets. Their love will shake the world…

When Aladdin discovers Zahra’s jinni lamp, Zahra is thrust back into a world she hasn’t seen in hundreds of years—a world where magic is forbidden and Zahra’s very existence is illegal. She must disguise herself to stay alive, using ancient shape-shifting magic, until her new master has selected his three wishes.

But when the King of the Jinn offers Zahra a chance to be free of her lamp forever, she seizes the opportunity—only to discover she is falling in love with Aladdin. When saving herself means betraying him, Zahra must decide once and for all: is winning her freedom worth losing her heart?

As time unravels and her enemies close in, Zahra finds herself suspended between danger and desire in this dazzling retelling of the Aladdin story from acclaimed author Jessica Khoury. 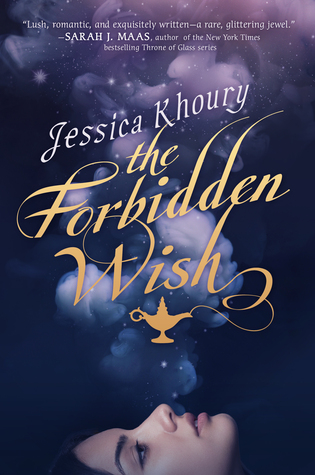 I received a copy of this title from the publisher via a Good Reads Giveaway. It does not impact my review.

Aladdin is one of my favorite Disney movies, but I am unfamiliar with the actual story it’s based on and I believe The Forbidden Wish is supposed to be a re-telling of that and not the cartoon I loved as a kid (and still love as an adult, let’s be honest). Even so, reading it still made me want to watch the movie (sadly, it’s not on Netflix, though).

The story is told through the point of view of the Jinni (genie), Zahara. I’m not entirely sure if it’s supposed to be in second person or if Zahara just occasionally talks to her last master and friend, Roshana. Either way, the writing was beautiful. I’m usually not real interested in a ton of description and there were times where I felt like it was a little too much here, but I could still appreciate how lovely and lyrical the writing was at times.

I liked both Zahara and Aladdin. Their friendship developed quickly and I thought they worked well together. I would’ve liked to have seen them get into a little more shenanigans than they did, though, because that’s when I felt like the book was the most entertaining. Though I did ship them together, I found the development of the romance a little underwhelming. Other than physical attraction (and there wasn’t a lot of rhetoric spent on that, thank goodness), I didn’t really see why either one of them started to fall for the other. It was just kind of sudden for me. That said, once it was determined that they had feelings for each other, there were some sweet moments between them that I enjoyed.

In the movie, Aladdin wishes to become a prince to marry the princess because he loves her. In this story, he still wants to marry the princess, but his motives are to avenge the death of his parents. There is a sub-plot of oppression and rebellion and also of a war between mortals and the Jinn. I have to say I was not as interested in that. While I was interested in seeing if Zahara could be granted freedom, all the rest of the jinni politics didn’t really capture my attention and I found myself skimming portions with them (even some of the final chapters which were pretty important).

Overall, I did enjoy The Forbidden Wish. The writing was beautiful (and so is the cover) and I liked the two main characters. Though it’s advertised as a re-telling, I think it stands pretty well on it’s own.

3 thoughts on “Review: The Forbidden Wish by Jessica Khoury”