Wedding-dress designer Jenny Tate understands the happily-ever-after business, yet somehow she’s still involved in her ex-husband’s life. In fact, Owen’s new wife may—inexplicably—be Jenny’s new best friend. Sensing this, well, relationship isn’t helping her move on, Jenny trades the Manhattan skyline for her hometown up the Hudson, where she’ll be able to bask in her sister Rachel’s picture-perfect family life…and hopefully make one of her own.

Her timing couldn’t be more perfect, since Rachel will need her younger sister. Her idyllic marriage has just fallen to pieces in spectacular fashion after she discovers her husband sexting with one of his colleagues. Second chances aren’t in Rachel’s nature, but the desire for an intact family has her rethinking her stance on adultery, much to Jenny’s surprise. Rachel points to their parents’ “perfect” marriage as a shining example, but to protect her sister Jenny may have to tarnish that memory—and their relationship­—and reveal a secret about their family she’s been keeping since childhood.

During this summer of secrets and lies, temptation and revelation, Jenny and Rachel will rely on each other to find the humor in their personal catastrophes, the joy in their triumphs…and the strength to keep hanging on. 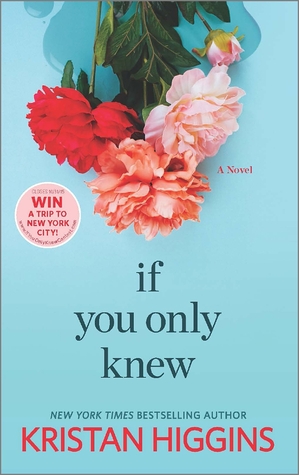 If You Only Knew is a bit of a departure from Higgins other books. This book focuses on two sisters – in which we get multiple 1st Person POV – instead of two romantic leads. There’s still some zany family members and funny moments, but it’s overall more…mature. That’s not at all to say that her other books are immature because they’re not. They’re light and fun and I adore them. But this one is just much more serious and her main characters may be a little more realistic.

Jenny is a wedding dress designer who is moving back to her hometown from Manhattan. She’s had a divorce that devastated her, but she’s still friends with her ex-husband. In fact, the book opens up with her at her ex-husband’s new wife’s baby shower. Her relationship with Owen and Ana-Sophia (the ex and his wife) was frustrating. Jenny tried very hard to appear that she was totally fine with everything and because they’re such nice people, she couldn’t really despise them like she thinks she should.

Rachel is Jenny’s sister and is a stay-at-home mom, mother to three-year-old triplets. (Yikes.) She loves her life, though, and her husband and her kids. Her world is rocked, though, when she finds out her husband, Adam, is cheating on her. Throughout the book Rachel’s and Adam’s relationship goes from one extreme to another. They try counseling and make baby steps towards healing, but it seems every time Rachel gets a little closer to moving on from it, Adam lies again. I was soooooo frustrated by Rachel throughout all of this. I know it’s much easier to say from outside the situation, but she really needed to end things. She just kept denying it and then going back to him time and time again. I think she was right to try counseling first. She wanted things to get better. But after the 2nd lie – or even the 3rd – I think it should have just been done.

Jenny isn’t doing a whole lot better with her new romance. She’s developed a relationship with the super at her new apartment, Leo. Leo is not the typical romantic hero from Higgins’ books. He’s withdrawn, often surly, appears to be a bit of a slacker. But I loved his sense of humor and the banter between him and Jenny. That was probably my favorite part of the book. Despite the fact that he obviously has feelings for Jenny, he’s very firmly stated that he’s “only for recreation” and does not want a relationship. Even though Jenny does want a relationship, she agrees to go along with it, thinking he’ll change his mind. You can guess how that goes.

The heart of the story is really Jenny and Rachel coming to terms with who they are and how to handle the new events of their lives. They both grow backbones and confront the people who are treating them poorly. While I enjoyed both storylines, I have to say that I enjoyed Jenny’s a little bit more. I found her slightly more likable and I was just so frustrated with Rachel pretty much all the time. The times she really shined, though, was when she was with her triplet daughters, which also provided some great humor.

Overall, I really enjoyed this book. Though the ending didn’t tie everything up in a happily-ever-after, definitive way, I did like what happened with both sisters and am hopeful for their futures. I was feeling in a bit of a book slump and this definitely brought me out of it. Though it was different than her other books, I still love Higgins’ writing style and character development. I never wanted to stop reading it. My biggest complaint is that there is a lot more foul language in this book than her others which I didn’t care for. However, I would definitely recommend this to fans of Higgins and character-driven novels.

There’s a giveaway from the book’s publisher for a trip to New York for you and a friend, including $1k in shopping money. You can enter it HERE.

3 thoughts on “Review: If You Only Knew by Kristan Higgins”