Love is an open door…except when it keeps slamming in your face.

Hopeless romantic Milly Rose has had her fair share of heartbreak. Obsessed with all things Disney, she refuses to give up on finding her Prince Charming – he’s out there somewhere, isn’t he?

When Milly is given a job to investigate the origins of an historical building in the village of Clovers Rest, she’s not sure what to expect. What she discovers takes her breath away – a beautiful real life Cinderella castle, complete with turrets, a magnificent drawbridge AND a very handsome owner…Cameron Heartstone.

As Milly and Cameron begin to unearth the secrets of Clover Castle, they can’t ignore the intense chemistry building between them. But they’ve both been hurt badly before. Can they take a big leap of faith and find their own happily-ever-after? 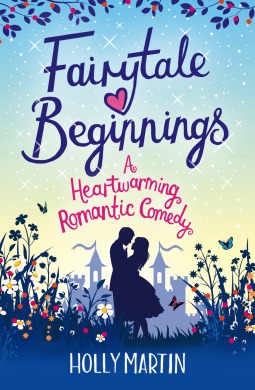 To be completely honest, I decided to read this book because of the cover. It’s whimsical and sweet and I was really in the mood for a cute, light read. While the book wasn’t entirely what I expected, it was a cute, enjoyable read.

Milly has a pretty awesome job working for a place called Castle Heritage that works on preserving castles. Cameron has recently inherited a property that he can’t afford to keep and renovate and hopes Castle Heritage will be able to help him. Milly, a die-hard Disney fan, loves the castle, but can tell right away that most of it is not the authentic architecture and thus Castile Heritage will probably not help. But because she likes Cameron and wants to help him, she stays a little longer than she should in a professional capacity and -surprise- they quickly fall for each other. Thrown into the romance plot is a bit of a fantasy element involving ghosts and curses and soul mates.

What worked for me:

-I felt like Milly and Cameron were both pretty well developed. They were likable characters and despite the insta-love, I was a fan of their romance.

-I love the castle setting. It was described very well and I wish it was real so I could visit it. It has dungeons and secret passages and a Disney-like appearance.

What didn’t work for me:

-The story started out pretty slow and it took me awhile to get into it.

-I was originally turned off by the presence of ghosts and curses because I wasn’t expecting that type of element in the story, but after awhile I got into it. I liked the incorporation of Milly’s possible role in breaking the curse, but I didn’t feel like that particular storyline was concluded in a satisfactory way. It felt like it was a big part of the plot for awhile and then it was kind of, “We’re real soul mates, forget about the curse.” I wish it would have either played a smaller role in the story or a bigger part in the end.

Overall, I enjoyed Fairytale Beginnings. I wanted a cute, light read and this book delivered. I enjoyed the castle setting and liked the characters, but I felt the plot could have been pulled together a little more. I think readers who enjoy Chick Lit and are Disney-obsessed adults like Milly would enjoy this book.