As a newly minted Assistant US Attorney in Washington, DC, Anna Curtis has already developed a thick skin to help her deal with the unsettling brutality she encounters daily in her overflowing stack of domestic violence cases. Yet when Laprea Johnson—battered to death by her boyfriend on the morning after Valentine’s Day—crosses Anna’s desk, there’s something about this particular case that Anna can’t quite shake, something that reminds the prosecutor of her own troubled past.

It’s also the biggest case of Anna’s career—and the most personal. If she wins it, she could lose everything. The victim she tried to protect is dead. Her lover—no, her ex-lover—is defending the accused killer. Caught between seeking justice for Laprea and saving her personal life, Anna makes a series of choices that jeopardize her career, her relationships, and her very life as she uncovers the shocking truth behind the murder.

Weaving expert knowledge with deft storytelling, Law of Attraction provides a fascinating glimpse into the most emotional cases of DC’s criminal justice system. 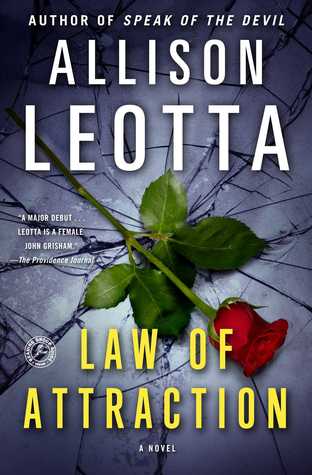 I recently read A Good Killing, which is the 4th book in the Anna Curtis series, and I really enjoyed it. I wanted to start the series from the beginning and not too long after that I won a giveaway from Allison Leotta where I won signed copies of the entire series! I finally finished the first book and I can’t believe I waited this long to read it!

In Law of Attraction Anna Curtis is a relatively new prosecutor in Washington DC. A domestic violence case comes across her desk and she takes a very personal interest in it. Things get complicated when her old law school classmate and current crush, Nick Wagner, is the public defender of the abuser, D’Marco. After the case is finished – and D’Marco is set free, Anna and Nick’s relationship heats up, only to come to a crashing halt when Laprea is found dead and Anna and Nick find themselves on opposing sides of the court. Anna joins Homicide chief Jack Bailey to put D’Marco away for good. However, the twists and turns that come up along the way may lead to an outcome Anna could never expect.

The story is told in 3rd person POV and we get the perspectives of pretty much all the major players – Mostly Anna, but also Nick, Jack, D’Marco, Laprea, and a couple of other minor characters. Most of the books I read tend to be 1st Person POV, which I love, but I think the 3rd person POV really worked well here. I loved getting everyone’s perspectives and felt it helped move the story along at a good pace.

I thought Anna was a well developed character and I liked to see her starting out in the profession. I also liked meeting the characters that popped up in A Good Killing – Jack, Anna’s sister Jody, and her friend Grace. It was pretty easy for me to be completely Team Cooper in A Good Killing, but now seeing Anna’s earlier romance I’m feeling conflicted about what’s to come.

Leotta did a good job of weaving information of legal processes into the story. Sometimes I think books like this go overboard with explanations, but I here I think we got just enough information of how things worked and I really found those tidbits interesting. My brother’s a cop and often has to go to court so I liked hearing another perspective of those same type of court proceedings.

The only thing I didn’t really like in this book is that there were a couple chapters where it stopped feeling like a crime/suspense book and felt like a straight up romance-including an overly graphic love scene. I understand that it was important to build up the relationship between Anna and Nick, but it was maybe a little bit much.

Overall, I really enjoyed Law of Attraction. I liked the writing style, the characters, and the case. While some of the plot played out predictably, the final twists were ones I didn’t see coming. This is a series I’m definitely glad I started from the beginning and I look forward to reading the next installment.