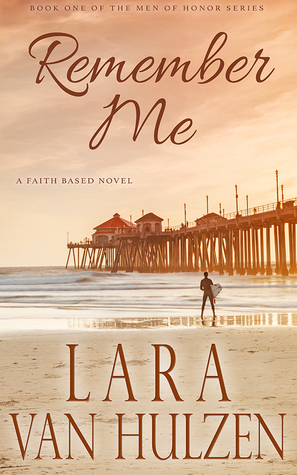 Detective Ben Russo is in trouble.

He just can’t remember why.

When a car accident lands Ben in the hospital, he can’t recall anything about his life. What he does know is he’s enchanted by a tiny nurse named Tess, but can’t shake the feeling they’re both in danger.

After being left at the altar, Tess Jansenn moves to a new town and starts over. When her ex-fiancé, Ben, shows up in the ER where she works with no memory of her, she must decide – tell Ben who he is or let him remember on his own.

Can Tess forgive and forget what drove them apart, and when Ben remembers, will the consequences of his choices make it too late for love?

I received a copy of this title from the author. It does not impact my review.

Fun fact before I get started. I went to a Nazarene college and Van Hulzen attended Point Loma Nazarene University in California. Every year when it snowed there were always people who vowed to transfer to Point Loma. So while I never met the author, or visited Point Loma, it’s kind of a cool connection.

Tess is a nurse who has a John Doe patient, someone who’s lost his memory. She’s surprised to find it’s her ex-fiancé. She’s torn about whether or not she should tell him the truth, but ultimately decides against it. Her friend and neighbor , Mike, who is a doctor, gives her the (somewhat flimsy) excuse that it would probably be better if he remembers things on his own. He offers his home to the recovering Ben, thus keeping him close to Tess.

I have to say that this really bothered me. I thought for sure there would be some type of legal ramifications because Tess speaks with a  police officer and doesn’t tell him that she knows who Ben is. However, I asked my brother, a cop, and he said it could technically be “obstruction of official business”, but probably wouldn’t be more than a misdemeanor, if that. And since it doesn’t take long for the police find his ID (kind of), it’s not really an ongoing case or anything.

So Ben goes home with Mike and Tess and begins to develop a relationship with Tess all over again. While she struggles with wanting to know why he left her before their wedding, she’s enjoying the second chance. She knows she eventually needs to tell him the truth if they are to try having a future together, but things fall apart when he recovers his memory on his own and doesn’t let on that he remembers. There are things he can’t tell Tess, yet, not without putting her in danger.

The characters in Remember Me are likable. While Tess did annoy me at some times, she was overall a good character. She made some poor decisions, but she realized they were poor and did try to do better. I liked Ben and found him the most complex character of the bunch. I would’ve liked to have seen a little more background information given on their relationship, though. I also really liked Tess’s friends, Mike and Emma.

Remember Me is a faith based novel, but I think people who don’t generally like “religion” in books would still enjoy it. There are mentions of church and relationships with God, but it’s never “preachy” and isn’t even a huge theme in the book, however I think it will still satisfy fans of faith based romantic suspense.

Overall, I enjoyed Remember Me. While a few parts were kind of predictable, the focus was really on the relationship between Ben and Tess and it was well done. I think fans of romantic suspense will enjoy it. I look forward to reading the next book in the series.

4 thoughts on “Review: Remember Me by Lara Van Hulzen”