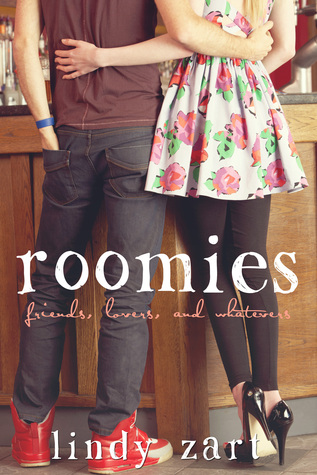 Graham Malone is my roommate, my personal eye candy, the reason I get up in the morning smiling (that could be from the illicit dreams I have about him too, I suppose. Let’s move on.). He’s also beautiful to look at, but his heart is where his true beauty lies. Take away the exterior and the interior still shines.

I love him. I mean, I’m pretty sure I do, having never been in love before. Anyway, it seems legit.

And now his brother Blake is here, and, well, he’s the complete opposite of Graham. Sarcastic, brooding, and totally available. But he’s leaving soon, and Graham’s the one I want. I shouldn’t have to remind myself of this, right? I wouldn’t have to if Blake would quit looking at me like I’m something yummy and he’s starving.

Here’s a toast to roomies; the ones you should never fall in love with. Or something.

If I had to sum up this book in two words, they would be “Cute” and “Frustrating“.

I love Friends to More Than Friends stories. I love watching the relationship grow and change and all the sweet moments along the way. I liked how close Kennedy and Graham were and that they were not only roommates, but best friends. I have to say the roommate angle appealed to me so much because I had a male roommate for a couple of years – however, while we were friends, our relationship was nothing like the characters in this book.

The story didn’t just focus on the romantic relationships, but on family too. Both characters have some family issues of varying degrees. I liked seeing some resolution come about by the end of the book.

Kennedy and Graham’s banter was pretty entertaining. I love a good sarcastic couple.

While I liked Kennedy’s sarcasm and sense of humor, there were times it was just too much. She could hardly ever take anything seriously and she kept blaming Graham for “missing their chance”, but I think he gave her plenty of chances that she blew by being so immature. She did finally have some good moments where things were resolved, though.

The love triangle could’ve been better. Blake kind of comes out of nowhere and goes after Kennedy right away, despite knowing how she and his brother feel about each other. While Blake and Kennedy did spend some time getting to know each other, I never really bought their possible romance.

It was obvious from the beginning that Graham has feelings for Kennedy, but she spends most of the book thinking the opposite. Graham also gets super jealous super easily and spends a lot of time refusing to believe that he and Kennedy will work out. It was annoying.

Overall, though, I enjoyed Roomies. The Cuteness definitely made up for The Frustrating. I enjoyed the banter and the burgeoning relationship. I would recommend this to fans of the Friends to Lovers trope and contemporary romance.